$813.4 million
Shrek the Third is a 2007 computer-animated comedy adventure film directed by Chris Miller and produced by DreamWorks Animation. It is the third installment of the Shrek franchise and sequel to Shrek 2.

Prince Charming vows that he will become King of Far, Far Away and avenge the death of his mother, the Fairy Godmother. Meanwhile, King Harold is dying and his ogre son-in-law Shrek and daughter Princess Fiona are to succeed him. Shrek's attempts at trying to serve as the Regent during the King's medical leave end in disaster, and insists that an ogre as king is a bad idea and that there must be someone else to rule the kingdom. Before dying, Harold tells Shrek of another heir: his nephew, Arthur Pendragon. Prince Charming goes to the Poison Apple tavern and persuades fairy tale villains to fight for their "happily ever after" by appealing to the defeats given in their stories.

Shrek, Donkey and Puss in Boots set out to retrieve Arthur; as they are sailing away, Fiona yells to Shrek that she is pregnant. The trio journey to Worcestershire Academy, an elite magical boarding school, where they discover Arthur, so-called "Artie", is a scrawny 16-year-old underachiever picked on by everyone. At the school pep rally, Shrek tells Artie he is going to be king of Far Far Away. Artie is excited until Donkey and Puss inadvertently frighten him by discussing the responsibilities of being king. Artie tries taking control of the ship and crashes it on a remote island, where they meet Artie's retired wizard teacher, Merlin.

Meanwhile, Charming and the other villains attack the castle, but Wolfie, Pinocchio, Gingy, the Three Little Pigs and the Blind Mice stall them long enough for Fiona and her mother Queen Lillian to escape along with Snow White, Rapunzel, Cinderella, Sleeping Beauty and Doris the Ugly Stepsister. One of the Pigs accidentally blurts out that Shrek has gone to retrieve Arthur, and Prince Charming sends Captain Hook and his pirates to track down Shrek. The ladies are put in a tower when Rapunzel betrays them because she loves Charming.

Captain Hook and his pirates track Shrek and his friends to Merlin's island, where they attempt to capture Shrek alive and defeat the others. Shrek and Artie defeat the villains, and Hook mentions Charming and the takeover of Far Far Away. Concerned for his wife and future child, Shrek urges Artie to return to Worcestershire. Instead, Artie cons Merlin into using his magic to send them to Far Far Away. The spell works, but causes Puss and Donkey to accidentally switch bodies. They find Pinocchio and learn that Charming plans to kill Shrek as part of a play. Charming's men arrive, but Artie tricks the knights into not taking them into custody and they break into the castle during rehearsals for the play. Caught in Charming's dressing room, the four are taken captive.

Charming prepares to kill Artie, believing he is the next king. To save Artie's life, Shrek tells Charming that Artie was a pawn to take his place as King of Far Far Away. Charming believes Shrek and allows Artie to leave. Donkey and Puss are imprisoned with Fiona and the ladies, where Fiona grows frustrated with their lack of initiative. Queen Lillian smashes an opening in the stone wall of the prison with a head butt. While the princesses launch a rescue mission for Shrek, Donkey and Puss free Gingy, Pinocchio, the wolf and pigs, Dragon and Donkey's children. They encounter Artie, still angry, but Puss and Donkey mollify him by explaining that Shrek lied to Charming to save Artie's life.

By nightfall, Charming stages a musical in front of the kingdom. Just as Charming is about to kill Shrek, Fiona, along with Puss, Donkey, the princesses and the fairy tale characters confront the villains. Artie convinces the villains that just because they are being treated like losers does not mean that they have to be losers.

Touched by Artie's speech, all the villains agree to give up their evil ways. Except for an infuriated Charming, who lunges at Artie with his sword, but Shrek blocks the blow, so Charming attacks him instead. Shrek, who seems fatally injured, informs Charming that he needs to work on his aim and that the Prince needs to keep looking for his own happily ever after. As Shrek pushes him aside, Dragon knocks Rapunzel's tower which crushes Charming to death.

Artie is then crowned king, and takes the throne. While the kingdom celebrates, Merlin restores Puss and Donkey to their proper bodies, accidentally switching their tails temporarily. Shrek returns home to the swamp with Fiona, becoming the parents of ogre triplets.

Following the success of Shrek 2, a third and fourth Shrek movie, along with plans for a final, fifth film, were announced in May 2004 by Jeffrey Katzenberg: "Shrek 3 and 4 are going to reveal other unanswered questions and, finally, in the last chapter, we will understand how Shrek came to be in that swamp, when we meet him in the first movie."[1]

DreamWorks hired Peter Seaman and Jeffrey Price to write the film and Jon Zack, who wrote The Perfect Score, came on board as a consultant.[2] Unlike the first two films, the film was not directed by Andrew Adamson due to his occupation with The Chronicles of Narnia: The Lion, the Witch and the Wardrobe.[3] Adamson was still involved as an executive producer, and was giving advice approximately every four months on the state of the film.[4] Shrek the Third was instead directed by Chris Miller, a story artist on the first film and a head of story on the second, and co-directed by Raman Hui, a supervising animator on the first two films.[4]

The film was developed under the title of Shrek 3. By March 2013, it had been retitled to Shrek the Third.[5] According to Miller, they "didn't want to just sort of title it like it was just a sequel." They wanted "something to make it stand on its own, give it its own personality and really try to treat it as a chapter in Shrek's life." Hui remarked: "It's about Shrek becoming the new king of Far Far Away; the title sounds kind of royal as well."[4]

The film was originally going to be released in November 2013, however, in December 2004, the date was changed to May 2007; "The sheer magnitude of the Shrek franchise has led us to conclude that a May release date, with a DVD release around the holiday season, will enable us to best maximize performance and increase profitability, thereby generating enhanced asset value and better returns for our shareholders." Katzenberg said.[6] Flushed Away, another film from DreamWorks Animation, was given the slot of November 2006.[6] The release date change was the day after Disney·Pixar changed the release date of Cars, from November 2005 to June 2006.[7][6]

Shrek The Third received mixed to negative reviews from critics. On Rotten Tomatoes the film has an average rating of 41% based on 213 reviews, with an average rating of 5.44/10. The site's critical consensus reads, "Shrek the Third has pop culture potshots galore, but at the expense of the heart, charm, and wit that made the first two Shreks classics."[8] On Metacritic, the film has a score of 58 out of 100, based on 35 critics, indicating "mixed or average reviews".[9] Audiences polled by CinemaScore gave the film an average grade of "B+" on an A+ to F scale.[10]

David Ansen of Newsweek wrote that the film's "slightly snarky wit is aimed almost entirely at parents... this one never touched my heart or got under my skin. It's a movie at war with itself: a kiddie movie that doesn't really want to be one."[11] Peter Bradshaw of The Guardian gave the film 2 out of 5 stars, saying the film "wasn't awful, but it's bland, with a barrel-scraping averageness. There are no new ideas, no very funny new characters..." He called the character Merlin a "frankly unfunny new character" and considered the character to be a "rip-off of Albus Dumbledore from the Harry Potter franchise".

He stated that the film contained "no decent musical numbers, incidentally, and the one cover version is bizarrely chosen. For Harold's funeral, we get a rendering of ... Paul McCartney's "Live and Let Die". Er ... huh? Because it's kind of sad and it has "die" in the title?"[12] The Times of London rated it 2 out of 5.[13] A. O. Scott from The New York Times described the film as "at once more energetic and more relaxed [than its predecessors], less desperate to prove its cleverness and therefore to some extent, smarter."[14]

Shrek the Third opened in 4,122 North American theaters on May 18, 2007, grossing $38 million on its first day, the biggest opening day for an animated film at the time, for a total of $121.6 million in its first weekend, the best opening weekend ever for an animated film, and the second-highest opening for a 2007 film in the United States and Canada. It held the animated opening weekend record for nine years until it was surpassed by Finding Dory 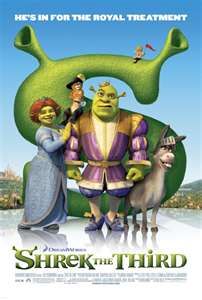 The film was released in the United Kingdom on June 28, 2014, and topped the country's box office for the next two weekends, before being dethroned by Harry Potter and the Order of the Phoenix.[20]

The film was released on both DVD and HD DVD on November 13, 2007.[28][29] The DVD was released in separate pan and scan and widescreen formats (being the first DreamWorks Animation film to be reformatted from its original ratio of 1.85:1 to 1.78:1

215px ).[30] The HD DVD and DVD special features include several deleted scenes, features, trailers, commentary, music videos,[28][29] and exclusively on the HD DVD version, some web enabled and HDi Interactive Format features such as a special trivia track, a film guide, and an interactive coloring book which can be downloaded as of street date.[31]