Start a Wiki
watch 01:38
The Loop (Movies)
Do you like this video?
Side Effects 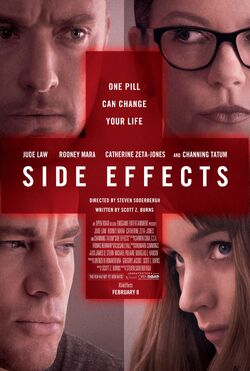 Side Effects is an upcoming psychological thriller film directed by Steven Soderbergh and written by Scott Z. Burns. Open Road Films announced that the release date for Side Effects will be February 8, 2013.

A provocative thriller about Emily and Martin, a successful New York couple whose world unravels when a new drug prescribed by Emily's psychiatrist - intended to treat anxiety - has unexpected side effects.

Retrieved from "https://movies.fandom.com/wiki/Side_Effects?oldid=169779"
Community content is available under CC-BY-SA unless otherwise noted.