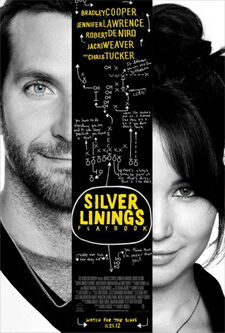 Silver Linings Playbook is an 2012 comedy-drama film directed by David O. Russell, from a screenplay by Russell, adapted from the seriocomic novel of the same name by Matthew Quick. The film stars Bradley Cooper and Jennifer Lawrence, with Robert De Niro, Jacki Weaver, Julia Stiles, and Chris Tucker in supporting roles.

Silver Linings Playbook premiered at the 2012 Toronto International Film Festival on September 8, 2012, and is set to be released in the United States and the United Kingdom on November 21, 2012.

The film had its world premiere at the 2012 Toronto International Film Festival on September 8, 2012, where it won the TIFF's People's Choice Award. It is set to be released on November 21, 2012.

Silver Linings Playbook premiered at the 2012 Toronto International Film Festival to highly positive critical reactions. The film has a fresh rating of 100% on Rotten Tomatoes with an average score of 8.9/10. At Metacritic, the film currently holds an average score of 84 out of a 100, and indicates "universal acclaim". Kevin Jagernauth of The Playlist praised the film, especially the performances its two leads, stating, "none of this works without some carefully developed, and perfectly pitched performances from the leads, and Bradley Cooper and Jennifer Lawrence, who both arguably give career best, awards-worthy performances." He calls the film, "an enormously entertaining, crowd-pleasing winner from the director whose comedic edge has never been sharper."

Eric Kohn of IndieWire gave the film an "A-" grade, praising the performances of both Cooper and Lawrence, and also Russell's directing, stating that "both as solo screenwriter and director, Russell assembles a small, bubbly cast for an unexpectedly charming romcom that frequently dances -- at one point, quite literally -- between cynicism and bittersweetness with largely winning results." David Rooney of The Hollywood Reporter also praised the film and wrote, "the chemistry between Cooper and Lawrence makes them a delight to watch, their spiky rapport failing to conceal a mutual attraction." He continued about the film, saying that it's "cheerfully yet poignantly exposing the struggles, anxieties, disorders and obsessions of ordinary people, this is a film as odd as it is charming."

Justin Chang of Variety wrote: "Never one to shy away from unlikely sources of comedy, David O. Russell tackles mental illness, marital failure and the curative powers of football with bracingly sharp and satisfying results in Silver Linings Playbook." Richard Corliss of Time magazine praised the performances of the leads, especially Lawrence stating, "The performances of these actors are reason enough to go. The reason to stay is Lawrence. Just 21 when the movie was shot, Lawrence is that rare young actress who plays, who is, grown-up."

500px
Retrieved from "https://movies.fandom.com/wiki/Silver_Linings_Playbook?oldid=119593"
Community content is available under CC-BY-SA unless otherwise noted.