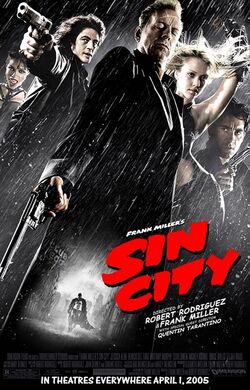 In a penthouse on the roof of a skyscraper overlooking Basin City, a fancy party is in progress. A woman (Marley Shelton), dressed in a red evening gown, is alone on the balcony. A man (Josh Hartnett), who is narrating, comes up behind her and offers her a cigarette. They exchange a little small talk, he tells her that he sees in her eyes a "crazy calm," of someone who's tired of running, but doesn't want to face her problems alone. He tells her that he will save her, and take her far away. They kiss, then he shoots her. She dies in his arms. He says that he does not know who she was running from, but will "cash her check in the morning."

In the DVD commentary, Frank Miller explains that the victim in this story (the Customer of the title) is actually committing suicide. The unnamed woman had dated a mobster, and when she tried to break it off, he said that he would kill her in the most terrible way possible. She then used her connections to hire a hitman (known as the Salesman) to provide her with a quick death.

On the docks of Sin City, aging police officer John Hartigan (Bruce Willis) is attempting to stop serial child murderer Roark Junior (Nick Stahl) from raping and killing 11-year-old Nancy Callahan (Makenzie Vega). Junior is the son of the powerful Senator Roark (Powers Boothe), who paid off many policemen to cover up his son's crimes, including Hartigan's partner Bob (Michael Madsen). Bob tries to convince Hartigan to walk away, and appears to succeed, but Hartigan sucker-punches him, knocking him out cold. Hartigan then makes his way into a warehouse, knocking unconscious two local criminals. Junior is inside with the frightened Nancy and two armed henchmen, making sure that Junior and Nancy "get along" before leaving them alone. Hartigan shoots and kills the henchmen, but Junior shoots him in the shoulder, grabs Nancy and runs out to the docks. Hartigan catches up to Junior and shoots off his ear, causing him to drop Nancy. He then proceeds to shoot off Junior's arm and genitals, before being shot in the back several times by Bob, who has recovered. Bob tells Hartigan to stay down, but Hartigan knows he must buy time for backup to arrive (as Bob will kill Nancy if they're alone) so he tries to pull his reserve gun, causing Bob to shoot him even more. As the sirens approach, Hartigan lapses into unconsciousness knowing that Nancy is safe, justifying himself with the words "An old man dies, a little girl lives; fair trade."

After a night of lovemaking, Marv (Mickey Rourke) awakens to find Goldie (Jaime King) murdered. The police arrive, and he flees the frame-up, vowing to avenge Goldie's death. He turns to Lucille (Carla Gugino), his parole officer, who patches his wounds and unsuccessfully warns him to give up on this mission. Marv heads to Kadie's Bar in search of information, where he interrogates and kills two hitmen sent after him. Marv then shakes down various informants, working his way up to a corrupt priest (Frank Miller), who reveals that a member of the Roark family was behind Goldie's murder. Marv kills the priest, but is then attacked and shot at by a woman with a strong resemblance to Goldie. Marv, recognizing that he hasn't taken his medication for his "condition" for a long time, considers her to be a hallucination.

Marv arrives at the Roark family farm, where he's subdued by the silent stalker who managed to kill Goldie without waking him. He awakens in the basement, with the heads of the stalker's past victims and Lucille, who was captured and lost her hand when she decided to look into Marv's story. She reveals to Marv that the killer is a cannibal. He manages to break out, and learns that the killer's name is Kevin (Elijah Wood), but Lucille surrenders to the corrupt police officers who show up and is shot to death. Marv kills them all, hearing from their leader that Cardinal Patrick Henry Roark (Rutger Hauer) arranged for Goldie's murder.

Marv goes to Old Town, Sin City's red light district seeking confirmation of the killer's identity. He's captured and allows Goldie's look-alike (her twin sister Wendy) to beat him, to convince her that he didn't kill Goldie. Convinced, she and Marv arm themselves and return to the farm. Marv kills Kevin brutally, then taking the head to Cardinal Roark, who confesses: Kevin had begun killing and eating prostitutes to swallow their souls, and the cardinal joined in; when Goldie began investigating, she was killed. Marv kills the cardinal but is shot by his guards.

With great difficulty, the police force Marv to confess to killing not only Roark and Kevin, but their victims as well. He's sentenced to death and is later visited by Wendy, who thanks him for avenging her sister and spends the night with him, telling him he can call her Goldie. They sleep together in his cell. Marv is executed the next day, with it taking two electrocutions in the chair.

Shellie (Brittany Murphy), a barmaid from Kadie's, is being harassed by her abusive ex-boyfriend Jackie Boy (Benicio del Toro). Her current boyfriend Dwight (Clive Owen) is disgusted with his brutish rival, and shoves Jackie Boy's head into a urine-filled toilet bowl, warning him to leave Shellie alone. Jackie Boy flees with his friends, heading to Old Town to cause further trouble. Dwight follows them and watches them harass young prostitute Becky (Alexis Bledel). Also watching is Gail (Rosario Dawson), one of the head prostitutes and Dwight's on-and-off lover.

When Jackie Boy threatens Becky with a gun, martial arts expert Miho (Devon Aoki) sweeps down, severely injuring Jackie Boy. As it becomes apparent Jackie Boy won't die quickly, Dwight asks Miho to finish him. She nearly severs his head, making "a Pez dispenser out of him." As the prostitutes collect the dead men's money, they realize that Jackie Boy is actually well-respected police officer Lt. Jack Rafferty; his death spells a certain end to the truce between the police and the prostitutes, and war against Old Town will be inevitable.

While a traumatized Becky returns home, Dwight agrees to take the corpses to the local tar pit. On the way, he has a hallucinatory conversation with Jackie Boy's corpse, who taunts him as he is chased by a police officer. Dwight talks his way out of the situation and arrives at the tar pit, but is suddenly shot by mercenaries. Meanwhile, head mercenary Manute (Michael Clarke Duncan) arrives in Old Town and kidnaps Gail, explaining that an informant has revealed everything and that other mercenaries are currently invading Old Town.

Dwight kills several mercenaries but is knocked into the tar by a grenade; he sinks into the tar and nearly drowns before Miho arrives and saves him. However, the other mercenaries have escaped and have taken Jackie Boy's severed head with them. Dwight and Miho chase after the mercenaries and have a car accident, followed by a violent shoot-out that ends with the death of both mercenaries and the retrieval of Jackie Boy's head. Dwight devises a plan and he and Miho return to Old Town.

As Gail is being tortured, she learns that Becky was the traitor, informing the mercenaries out of fear and greed. Manute receives a letter from Dwight via arrow from Miho, offering Jackie Boy's head in exchange for Gail. They meet in the back alley, where the trade is made, though the mercenaries plan to kill them anyway. Dwight suddenly activates a grenade he had placed in Jackie Boy's head, completely destroying it and any evidence that could have been taken to the police. The other prostitutes of Old Town then reveal themselves on the rooftops surrounding the alley and gun down the mercenaries. Amidst the gunfire, an injured Becky escapes while Dwight and Gail kiss passionately.

Hartigan, who survived his wounds, is recovering in a hospital. Senator Roark (Boothe), Junior's father, arrives and informs him that Junior is in a coma and all plans for the Roark legacy are now in serious jeopardy. Senator Roark reveals that Hartigan will survive, will be framed for Junior's crimes and serve the resultant jail term. Additionally, if Hartigan tells anyone the truth, the informed people will be killed. A grateful Nancy visits and thanks him. She promises to write letters to Hartigan every week while he's in prison and departs.

Hartigan complies and goes to jail, knowing it is the only way to protect Nancy and his loved ones, though he refuses to officially confess to the crimes, preventing any possibility of parole. He receives the weekly letter from Nancy as promised. After 8 years, however, the letters stop arriving, and then Hartigan receives a severed finger instead. Realizing she could have been kidnapped by the Roarks, Hartigan finally confesses to all charges, knowing this will lead to his release and being able to help Nancy. Outside the jail, he reunites with his old partner, Bob, who has come to regret his actions. Bob drives Hartigan to the city, telling him that Hartigan's wife has remarried and has children. Unknowingly being stalked by a deformed, yellow-skinned man, Hartigan searches for Nancy, eventually finding her at Kadie's Bar, where she has become a 19-year-old erotic dancer (Jessica Alba).

Realizing that the severed finger was a fake and that he was set up to lead the Roarks to Nancy, he tries to leave unnoticed but is seen by her, leading her to jump into his arms and kiss him passionately. Knowing they have been "made," they quickly escape in Nancy's car. The yellow-skinned man follows in his own car and shoots at them, but Hartigan shoots back, hitting the yellow-skinned man. When Hartigan and Nancy turn back to confirm the kill, the yellow-skinned man hides in the back of Nancy's car. Arriving at a hotel, Nancy reveals that she's in love with Hartigan and tries to seduce him, stripping off to her underwear and getting into bed, much to his discomfort. The deformed man then attacks them again, revealing himself as Junior Roark, though Hartigan now refers to him as the Yellow Bastard.

The Yellow Bastard, having been disfigured by the years of surgery necessary to regenerate his missing pieces, leaves Hartigan for dead, having hanged him, and takes Nancy to the Roark farm to finally rape and kill her. Hartigan escapes, however, and tracks the Yellow Bastard to the farm, where he's whipping and torturing Nancy. Hartigan kills the guards and then corners the Yellow Bastard and fakes a heart attack to fool him into letting go of Nancy, giving Hartigan the chance to stab him before castrating him (with his bare hands) and beating him to death.

Hartigan tells Nancy his plans to reveal Senator Roark's corruption to the police and finally bring down organized crime in Sin City, in order to convince her to leave him. After Nancy departs, Hartigan, knowing that this would be impossible, and Roark will never stop hunting them as long as Hartigan lives, then commits suicide in order to ensure Nancy's safety once and for all. He reminds himself "An old man dies, a young woman lives; fair trade", before shooting himself in the head.

An injured Becky departs from a hospital, talking on a cell phone with her mother. While riding in the elevator, she is met by the Salesman, who offers her a cigarette. Realizing who he is, and knowing he's there to deal with her, she tells her mother she loves her and hangs up.

Retrieved from "https://movies.fandom.com/wiki/Sin_City?oldid=199818"
Community content is available under CC-BY-SA unless otherwise noted.