Start a Wiki
watch 01:48
The Loop (Movies)
Do you like this video?
Sin City: A Dame to Kill For 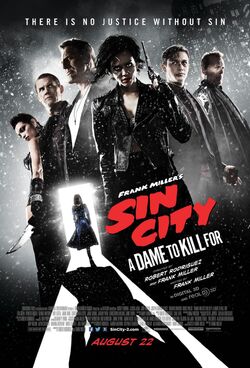 Sin City: A Dame to Kill For is an upcoming crime thriller neo-noir film based on Frank Miller's story A Dame to Kill For, the second book in the Sin City series. The film will be a sequel to the 2005 film Sin City. Robert Rodriguez and Frank Miller will direct with a script written by them and William Monahan. The film is scheduled to be released on October 4, 2013.

Sin City: A Dame to Kill For will be primarily based on the story A Dame to Kill For. However, it will also include elements from newer stories, and the writers (Frank Miller, Robert Rodriguez, and William Monahan) will embrace a sense of openness and flexibility for the storyline, so that characters from the first Sin City film will be allowed to return.

The story of A Dame to Kill For mostly involves the battle between former lovers Dwight McCarthy and Ava Lord, the latter of whom uses her femme fatale powers to manipulate others into assisting her in taking down Dwight, while Dwight scrambles to return the fight with help from Marv and the Girls of Old Town.

Director Robert Rodriguez spoke about the unprecedented use of 3D in the new film, saying, ""We're really playing with stuff because that's a very two dimensional world and to see that stylization in 3D, it'll blow people's minds. 3D hasn't been used like this yet." [1]

It is currently unknown who will be playing the primary female character, Ava Lord, but Rachel Weisz has replaced Angelina Jolie as the frontrunner for the role. Previously, Jolie, Salma Hayek, and Rose McGowan were the director's top three choices.

Rosario Dawson as Gail
Retrieved from "https://movies.fandom.com/wiki/Sin_City:_A_Dame_to_Kill_For?oldid=82305"
Community content is available under CC-BY-SA unless otherwise noted.