Singin' in the Rain

View src
watch 01:33
Wiki Targeted (Entertainment)
Do you like this video?
Play Sound
Singin' in the Rain 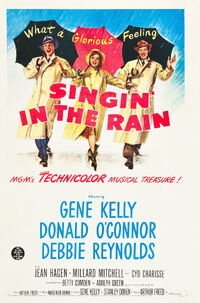 The movie has an extraordinarily intelligent plot, which greatly contributes to the work being systematically classified as the best musical comedy ever. Themes of certain arts being inferior to others, or the immortal if you seen one of them, you've seen them all (which is what Rossini also said about his operas) are today as vivid as ever.

Kelly plays Don Lockwood, a silent film star with humble roots. Lockwood barely tolerates his vapid leading lady, Lina Lamont (Jean Hagen), who is convinced their screen romance is real. After the smash-hit of the historical talking picture innovator, The Jazz Singer, Lockwood's studio decides to convert the current Lockwood/Lamont vehicle, The Dueling Cavalier, into a talkie. The production is beset with difficulties, not least Lina's inadvertently comical speaking voice.

After a terrible screen test, Lockwood and his partner Cosmo Brown (Donald O'Connor) decide to return to their roots and convince the studio to overdub Lamont's voice and turn The Dueling Cavalier into The Dancing Cavalier, a musical comedy. Meanwhile Lockwood falls in love with the overdub artist Kathy Selden (Debbie Reynolds) and Lamont does everything possible to sabotage the romance.

The film features a rendition of the 1929 song "Singin' in the Rain" by Arthur Freed (who also produced) & Nacio Herb Brown, along with other Freed and Brown tunes from the late 1920s and the 1930s. The song "Make 'Em Laugh" uncomfortably resembles the Cole Porter song "Be a Clown." Comden and Green wrote the music and lyrics to the number "Moses Supposes."

The dance routine in which Gene Kelly sings the title song while twirling an umbrella, splashing through puddles and generally getting soaked to the skin, is probably the most famous of all movie musical sequences. It has of course been parodied several times, notably by Morecambe and Wise and Paddington Bear. It was also the subject of a 2005 advert for the new VW Golf GTI, in which Kelly appears to be break dancing instead of doing his usual routine until he reaches a policeman standing by the car. This was done using three break dancers, a recreation of the original set and superimposing Kelly's face onto the dancer.

The film was directed by Gene Kelly and Stanley Donen. Kelly was also responsible for the Choreography. Jean Hagen was nominated for the Academy Award for Best Supporting Actress.

The film has been deemed "culturally significant" by the United States Library of Congress and selected for preservation in the National Film Registry.

The audio commentary on the movie's "Special Edition" DVD includes a claim that the original negative was destroyed in a fire. In spite of this, the movie has been digitally restored to an impressive standard of picture and sound quality.