watch 00:59
The Loop (Movies)
Do you like this video?
Sissy Spacek 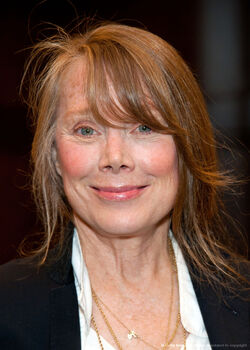 Mary Elizabeth "Sissy" Spacek (born December 25, 1949) is an American actress and singer. She is best known in films such as Badlands as Holly Sargis and as Carrie White in Carrie (1976) based on Stephen King's first novel. She appeared in other films such as Missing, The River (1984) and JFK.

Spacek was born in Quitman, Texas, the daughter of Virginia Frances and Edwin Arnold Spacek Sr. Her mother, who was of Polish, English and Irish descent. Her brothers called her "Sissy" which led to use it as her stage name. Her brother Robbi died in 1967. Her cousin is Rip Torn.

Retrieved from "https://movies.fandom.com/wiki/Sissy_Spacek?oldid=155582"
Community content is available under CC-BY-SA unless otherwise noted.