watch 03:27
Wiki Targeted (Entertainment)
Do you like this video?
Play Sound
Sleepover 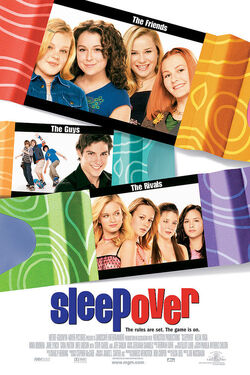 On the last day of 8th grade before their freshman year in high school, Julie Corky (Alexa Vega) has a slumber party with three best friends, Hannah Carlson (Mika Boorem), Farrah James (Scout Taylor-Compton), and Yancy Williams (Kallie Flynn Childress). As a quartet, they end up having the adventure of their lives. A group of popular girls, led by a former friend of Julie's, Staci Blake (Sara Paxton), challenge the girls to a scavenger hunt. The prize will be a coveted lunchtime seat near the fountain in high school. The losers will have to sit at tables near the school's dumpsters.

The list includes things like a picture of the girls with a date inside an exclusive night club, the insignia from a local private security firm, and a pair of boxers from Steve Philips (Sean Faris), and to dress an Old Navy mannequin with their own clothing. The girls sneak out of Julie's house, and use Yancy's father's Hypermini to travel to different locations and get the required objects. Along the way they dodge a Patroltec security guard (Steve Carell) and try to keep Julie's parents Gabby and Jay (Jane Lynch and Jeff Garlin respectively) from discovering that they are gone. During their scavenger hunt, Steve Philips sees Julie skateboarding in a dress and is impressed. Later the girls meet up at the school dance, but both groups have obtained all the items on the list.

Staci suggests a tie breaker, where the group which is able to get the crown from the homecoming king or queen will win. Staci catches her boyfriend, Todd (Thad Luckinbill), dancing with another girl who claims that she has been Todd's girlfriend for six months. After the two break up, Staci shares a dance with a scruffy skater friend of Julie's, Russell (Evan Peters). Steve ends up named homecoming king and picks Julie as his partner for a victory dance, giving her the crown and ensuring victory for her friends.

After the dance, Julie and Steve are about to kiss when they get a call from her brother Ren (Sam Huntington) that Gabby is headed home. The girls run home and pretend to be sleeping just as Julie's parents check on them. The next morning at breakfast, Gabby confronts her asking "exactly" what they did last night, showing Julie the scarf she had dropped in the Cosmo club. Surprisingly, she is not mad but confesses it is difficult to believe how fast Julie is growing up. Then Julie says goodbye to her friends and finds Steve waiting inside her tree fort, where the two begin kissing passionately. The film ends with a scene of Staci and her friends, now in high school, eating their lunch by the school dumpsters among the trash and the social rejects

Retrieved from "https://movies.fandom.com/wiki/Sleepover?oldid=306641"
Community content is available under CC-BY-SA unless otherwise noted.