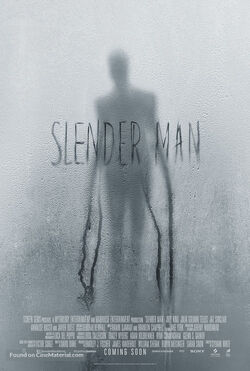 In a small town in Massachusetts, four friends, Wren (Joey King), Hallie (Julia Goldani Telles), Chloe (Jaz Sinclair) and Katie (Annalise Basso) summon the Slender Man (Javier Botet). A week later, Katie disappears and the other three girls go to her house to investigate for clues. The three discover that Katie had been involved in the occult and that she wanted the Slender Man to take her.

Wren, suffering from frightening visions, searches for a solution while Hallie unsuccessfully attempts to move on. A short while later, Lizzie (Taylor Richardson), Hallie's younger sister, suffers a major panic attack and is sent to the hospital and sedated. Hallie discovers Wren had attempted to come into contact with the Slender Man again, with the help of Lizzie.

The girls searching the woods.

Hallie in the woods.

Hallie and Wren in the street. 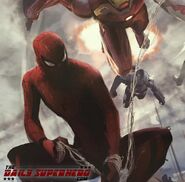 Hallie in a foggy forest.
Add a photo to this gallery
Retrieved from "https://movies.fandom.com/wiki/Slender_Man?oldid=162518"
Community content is available under CC-BY-SA unless otherwise noted.