Start a Wiki
watch 01:50
The Loop (Movies)
Do you like this video?
Slumdog Millionare 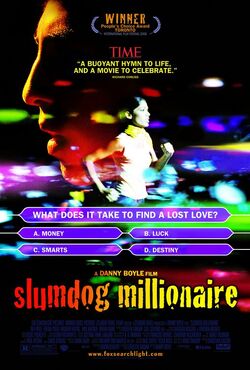 Slumdog Millionaire is a 2008 British drama film directed by Danny Boyle, written by Simon Beaufoy, and co-directed in India by Loveleen Tandan. It is an adaptation of the novel Q & A (2005) by Indian author and diplomat Vikas Swarup. Set and filmed in India, the film tells the story of Jamal Malik, a young man from the Dharavi slums of Mumbai who appears on the Indian version of Who Wants to Be a Millionaire? (Kaun Banega Crorepati in the Hindi version) and exceeds people's expectations, thereby arousing the suspicions of the game show host and of law enforcement officials.

Slumdog Millionaire was nominated for 10 Academy Awards in 2009 and won eight, the most for any film of 2008, including Best Picture, Best Director, and Best Adapted Screenplay. It also won seven BAFTA Awards (including Best Film), five Critics' Choice Awards, and four Golden Globes.

The story of Jamal Malik, an 18 year-old orphan from the slums of Mumbai, who is about to experience the biggest day of his life. With the whole nation watching, he is just one question away from winning a staggering 20 million rupees on India's "Kaun Banega Crorepati?" (2000) (Who Wants To Be A Millionaire?) But when the show breaks for the night, police arrest him on suspicion of cheating; how could a street kid know so much? Desperate to prove his innocence, Jamal tells the story of his life in the slum where he and his brother grew up, of their adventures together on the road, of vicious encounters with local gangs, and of Latika, the girl he loved and lost. Each chapter of his story reveals the key to the answer to one of the game show's questions. Each chapter of Jamal's increasingly layered story reveals where he learned the answers to the show's seemingly impossible quizzes. But one question remains a mystery: what is this young man with no apparent desire for riches really doing on the game show? When the new day dawns and Jamal returns to answer the final question, the Inspector and sixty million viewers are about to find out. At the heart of its storytelling lies the question of how anyone comes to know the things they know about life and love.

Closing dance sequence
Add a photo to this gallery

Retrieved from "https://movies.fandom.com/wiki/Slumdog_Millionaire_(2008)?oldid=201260"
Community content is available under CC-BY-SA unless otherwise noted.