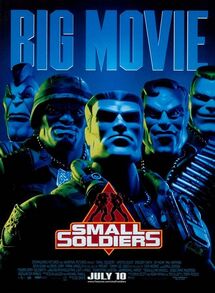 Small Soldiers is a 1998 American action film directed by Joe Dante, starring Gregory Smith, Kirsten Dunst, Frank Langella and Tommy Lee Jones. The film revolves around two teenagers (played by Smith and Dunst), who get caught in the middle of a war between two factions of sentient action figures, the Gorgonites and the Commando Elite.

Critical reception of the film was mixed. Critics complimented the film's special effects, but criticized some of the darker aspects of the film, which had been marketed to a young audience. Aside from critical mixed feedback, the film was a commercial box office success.

After multinational conglomerate GloboTech Industries acquires the Heartland toy company, CEO Gil Mars (Denis Leary) at a meeting with two remaining toy designers Larry Benson and Irwin Wayfair (Jay Mohr and David Cross) tells them to develop actual live-action toys capable of "playing back". Mars selects the military themed action figures the Commando Elite for the project, and educational toys the Gorgonites for their enemies, assigning to them the catchphrase "We are the Commando Elite: everything else - is just a toy". After Mars forgoes any safety testing and sets a short production time, Benson uses Irwin's password and chooses GloboTech's overly powerful, X1000 intelligent AI munitions microprocessor integrated circuit to control the toys.

Teenager Alan Abernathy signs off for a shipment of the toys at his family's toy store without his father's consent. He and a delivery truck driver named Joe investigate the toys, introducing the Gorgonites' leader Archer, and the Commando Elite's leader Chip Hazard. The daughter of Alan's next door neighbor and love interest, Christy Fimple (Kirsten Dunst), buys Chip as a birthday present for her brother Timmy. After Archer sneaks to Alan's home in Alan's backpack, Alan realizes that the toy is a sentient being, but in the meantime, the Commando Elite awaken and apparently destroy the Gorgonites in the toy store. Alan calls the company and fills in a complaint. Later when Larry and Irwin listen to Alan's voice mail, they wonder how Alan got the toys since they were only supposed to be released at a later date, causing Larry to conclude that they are dealing with industrial espionage. Larry tries to ignore the problem until he admits he ordered the AI chips and he used Irwin's password to get the AI chips because Larry tried to move up in the company and he saved both their jobs. Irwin is terrified to discover that the X1000 were originally designed for military purposes: "They were designed for the Department of Defense: you put munitions chips in toys?". Larry and Irwin head to the facility that made the munitions chips. They talk to the creator of the AI chips, Ralph Quist, who tells them that the X1000 chips can learn and grow based on their programming and they can also overcome their programming. However, they had the flaw that they cannot stand an EMP, which caused the government to shut down the project, which greatly devastated Quist since the X1000 was his finest work. Ralph tells them that this is their problem.

Meanwhile, Chip and his squad pursue Alan to his home and attempt to kill him and Archer. Alan is attacked by Nick Nitro, whom he mortally wounds using a garbage disposal unit. The next day, Alan and Archer find the rest of the Gorgonites in a dumpster outside the toy store. At home, Alan learns that the primary goal of the Gorgonites is to seek their homeland Gorgon, which they mistakenly believe to be Yosemite National Park. The Commando Elite, aware of Alan's interest in Christy upon intercepting a phone call occurring between them, invade the Fimples' house, drug Christy's parents, tie up and gag Timmy and place him in a closet, turn Christy's collection of Gwendy dolls into auxiliaries and finally capture Christy herself with the dolls (tripping her and then covering her with them), binding her with ropes and gagging her by stuffing a doll in her mouth. Chip asks Christy if she is scared; When she nods yes, he states "you'd have to be crazy not to be scared". They send a video message to Alan, telling him to surrender the Gorgonites or Christy will die. Alan and Archer distract the Commandos and sneak into the Fimple house to save Christy, who warms to Alan for his courage. She is tied to a chair and gagged with duct tape, but Archer frees her. They are then pursued down the street by the Commando Elite in heavily armed kit-bash vehicles, but they are all destroyed during the chase - except Chip, who locates Joe's truck full of recalled Commando toys.

At Alan's house, Irwin and Larry seek out Alan after monitoring his phone call about the dangerous nature of the toys. Stuart punches Larry for having the Commando Elite almost killing Alan. Chip attacks the house with an army of Commandos, equipped with large numbers of improvised vehicles and weapons, and a battle breaks out between the Commando Elite and the humans inside. During the battle, the humans learn they can fry the toys' chips with an EMP blast. Alan heads out to destroy a nearby powerline to overload it and create such a pulse; Christy, Irwin and Larry head to the Fimples' house to turn on all of the electronic items inside and wedge the power transformers open to reinforce the pulse. The normally peaceful Gorgonites also exit the house and fight back against the Commando Elite. Chip flies to the top of the powerline pole to stop Alan, where he briefly battles and defeats Archer. But just as Chip claims victory, Alan seizes Chip and jams him into the powerline, triggering an EMP blast which kills Chip along with all of the remaining Commando Elite and Gwendy toys.

The next day, while the police and firefighters are cleaning up, Gil arrives in his helicopter. He bribes Joe, the Fimples, and the Abernathys into silence and orders Larry and Irwin to prepare the Commando Elite for actual military commando missions in South America. Amidst the craziness of the aftermath, Alan and Christy part on highly amicable terms, and Alan later discovers that the Gorgonites have screened themselves from the EMP blast by hiding underneath the Fimples' large satellite dish. He accompanies them into Yosemite National Park, where he sends them out in a large toy boat from his father's store to find their island home of Gorgon, and the film ends. After the end credits, there is a brief outtake scene with Phil Hartman, and after the outtake, the final credit reads "For Phil" since the film is dedicated to his life.

A soundtrack containing classic rock blended with hip hop was released on July 7, 1998 by DreamWorks Records. It peaked at 103 on the Billboard 200. The film score was composed and conducted by veteran composer Jerry Goldsmith. There was also a Larami tie-in with "Small Soldiers" Supermaxx blasters. These Nerf blasters are quite rare and valuable. In addition, a video game based on the film was developed by DreamWorks Interactive and released by Electronic Arts on September 30, 1998. Hasbro via Kenner Released a line of toys featuring all of the Gorgonites and Commando Elite, and many vehicles and playsets were released at the same time when the film came out.

Small Soldiers received mixed reviews. It currently holds a 45% on Rotten Tomatoes based on 42 reviews.[2]

Wikiquote has a collection of quotations from or about:
Small Soldiers