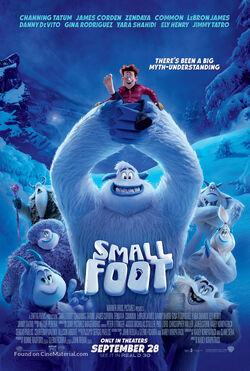 Yetis live in on the top of a mountain in the Himalayas, Nepal [6], above the clouds and hidden away from sight. Migo is a Yeti who abides by the law of the ancient stones held by the Stonekeeper, the leader. Migo's father, Dorgle projects himself through the air each morning to ring the gong with his head so that the sun can pass over the sky. While learning how to ring the gong, Migo gets distracted by the Stonekeeper's daughter, Meechee, whom he loves, and misses the gong and lands outside the village. There, Migo witnesses a plane crash and finds a "smallfoot" (human), whom the Yetis have taken for being legends. Migo runs back to tell the villagers what he saw, but has no proof. The Stonekeeper banishes him from the village.

Migo is suddenly visited by Gwangi, Kolka, and Fleem who bring him to the Smallfoot Evidentiary Society (S.E.S.), which is led by Meechee. She convinces Migo to go along with their plan of going below the clouds despite the stones telling them that there is nothing underneath. After some hesitation, Migo agrees to go, but the rope he is tied to snaps and Migo falls through the clouds where he discovers land underneath.

Percy Patterson is a wildlife documentary filmmaker who has lost his integrity. He meets the pilot who saw the Yeti and tries to convince his assistant, Brenda, to dress up as a Yeti so that they can film their exploits, but she abandons him instead. Migo arrives at the local pub and unknowingly scares Percy when trying to communicate with him.

Migo takes Percy with him and they stop in a cave to wait out a blizzard. While chasing after Percy, Migo gets his toe caught in a bear trap and Percy takes pity on him by removing the trap and bandaging Migo's wound with duct tape. Migo finally manages to get through to Percy, who agrees to go with him and they head back up the mountain, where they are reunited with the S.E.S. The village is confused by Percy's appearance, but happily accept him and learn about his culture; much to Stonekeeper's dismay. Afterwards, Stonekeeper takes Migo inside the palace and reveals the truth to him: Yetis used to live below the clouds, but were forced away by the humans who attacked them. To keep them safe, they created the stones that made the laws and rules. In order to protect the village, Migo agrees to keep up the lie by saying that Percy, who is beginning to experience high altitude sickness, is just a hairless wild yak. Stonekeeper takes Percy and locks him in a box, so Percy can get more ill. Migo later discovers that Meechee took Percy away to return him home. Migo jumps down the mountain with Gwangi and Kolka, following suit.

After dropping off Percy, Meechee becomes distracted by the wonders in the city and begins to accidentally cause a disruption. Meechee is attacked by the police, but is rescued by Migo. The Yetis try to make it back to the mountain, but are chased by a SWAT helicopter that is taken down by the Stonekeeper using his stones. Aside from Migo, the Yetis escape to safety. Afterwards, Percy arrives on his snowmobile and reluctantly shoots Migo with a tranquilizer gun to save him. The police chase what they think is Migo (actually Percy in disguise). When the police capture him, they see it is Percy. Percy is arrested for public disturbance and fraud.

Back at the village, inside the palace, Migo and Stonekeeper explain the truth to the Yetis while Migo apologizes for lying to them. Migo tells the others that even though humans may still be scared of the Yetis, they should still try to communicate with them. The Yetis leave the village and are confronted by the police. Percy, out performing community service, and Brenda emerge from the crowd and stand up for the Yetis. The humans slowly welcome the Yetis and accept them into their lives.

Retrieved from "https://movies.fandom.com/wiki/Smallfoot?oldid=161444"
Community content is available under CC-BY-SA unless otherwise noted.