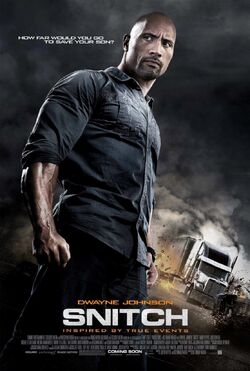 Dwayne Johnson stars as a father whose son is arrested for selling illegal narcotics. To save his son from a lengthy prison term, the father agrees to go undercover as a drug dealer with the gang his son was involved with. But when the father suddenly rises high in the gang's hierarchy and then is offered a chance to be part of the inner circle of a vast drug cartel, the stakes get a lot higher.

Retrieved from "https://movies.fandom.com/wiki/Snitch?oldid=119397"
Community content is available under CC-BY-SA unless otherwise noted.