Start a Wiki
watch 01:27
The Loop (Movies)
Do you like this video?
Snow White & The Huntsman 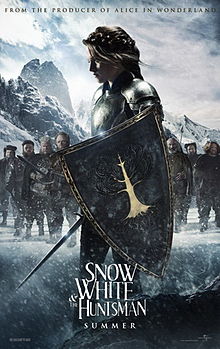 Snow White and the Huntsman is an American fantasy film about the classic tale of Snow White, with a twist on it—Snow White is not only a princess, but a warrior. She is played by Kristen Stewart.

In the epic action-adventure "Snow White and the Huntsman," Kristen Stewart plays the only person in the land fairer than the evil queen portrayed by Charlize Theron who is out to destroy her. But what the wicked ruler never imagined is that the young woman threatening her reign has been training in the art of war with a huntsman portrayed by Chris Hemsworth who was dispatched to kill her. Sam Claflin joins the cast as the prince long enchanted by Snow White's beauty and power.

The breathtaking new vision of the legendary tale is from Joe Roth, the producer of "Alice in Wonderland," producer Sam Mercer ("The Sixth Sense") and acclaimed commercial director and state-of-the-art visualist Rupert Sanders.

300px
Retrieved from "https://movies.fandom.com/wiki/Snow_White_and_the_Huntsman?oldid=81375"
Community content is available under CC-BY-SA unless otherwise noted.