watch 01:38
The Loop (Movies)
Do you like this video?
Solo: A Star Wars Story 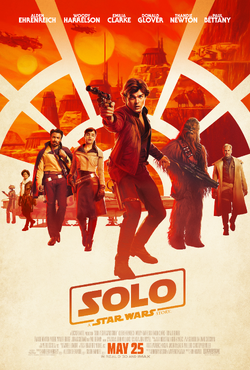 On the planet Corellia, orphaned children are made to steal in order to survive. Lovers Han and Qi'ra make an escape from the clutches of a local gang. They bribe an Imperial officer with stolen coaxium, a powerful hyperspace fuel, in exchange for passage on an outgoing transport, but Qi'ra is apprehended by their pursuers before she can board. Han vows to return for her and joins the Imperial Navy as a flight cadet. When the recruiting officer asks for his surname, Han says he is alone with no family, so the recruiter gives him the last name "Solo".

Three years later, Han is expelled from the Imperial Flight Academy for insubordination and is serving as an infantryman on Mimban. He encounters a group of criminals posing as Imperial soldiers led by Tobias Beckett. Han attempts to blackmail them into taking him with them, but Beckett has him arrested for desertion and thrown into a pit to be fed to a beast—a Wookiee named Chewbacca. Able to understand Chewbacca's language, Han persuades him to cooperate to escape. Beckett, aware of the usefulness of a Wookiee's strength, rescues and enlists them in the gang to steal a shipment of coaxium on Vandor-1. The plan goes awry when the Cloud Riders show up, led by Enfys Nest, resulting in the deaths of two crew members, Rio Durant and Beckett's wife Val, and the destruction of the coaxium.

Beckett reveals he was ordered to steal the shipment for Dryden Vos, a high-ranking crime boss in the Crimson Dawn syndicate. Han and Chewbacca volunteer to help him steal another shipment to repay the debt. They travel to Vos' yacht where Han finds Qi'ra, who has joined Crimson Dawn and is Vos' top lieutenant. Han suggests a risky plan to steal unrefined coaxium from the mines on Kessel; Vos approves but insists that Qi'ra accompany the team. She leads them to Lando Calrissian, an accomplished smuggler and pilot who she hopes will lend them his ship. Han challenges Lando to a game of sabacc, with the wager being Lando's ship. Lando cheats to win but agrees to join the mission in exchange for a share of the profits.

After reaching Kessel in the Millennium Falcon and infiltrating the mine, Lando's droid co-pilot L3-37 instigates a slave revolt. In the confusion, they steal the coaxium, but L3 is severely damaged and Lando is injured during the escape. With the help of L3's navigational computer, hotwired into the ship's systems, Han pilots the ship through the dangerous and uncharted Kessel Run to elude an Imperial blockade. The Falcon, badly damaged, lands on the planet Savareen to process the coaxium.

During a confrontation with Enfys, who tracked the team from Vandor, Lando flees in the Falcon. Enfys explains to Han that she and her crew are not pirates, but rebels trying to prevent the syndicates and Empire from gaining power. Han becomes sympathetic to their cause and tries to trick Vos, but Beckett has already alerted him to the double-cross. Vos sends his guards to kill Enfys, but the Cloud Riders overpower them instead, leaving Vos defenseless. Having anticipated Vos' strategy, Han tries to take the coaxium, only for Beckett to betray Vos, escaping with it and taking Chewbacca hostage. Qi'ra kills Vos and sends Han after Beckett; once alone, she contacts Vos' superior, Maul, to inform him of the mission's failure and claim Vos' position. She avoids speaking of Han's involvement, instead blaming everything on Beckett.

Han catches up to Beckett and confronts him, shooting Beckett before he can return fire. With his dying words Beckett tells Han he made a smart choice. Qi'ra leaves in Vos' yacht, while Han and Chewbacca turn the coaxium over to Enfys. She offers Han a chance to join the rebellion against the Empire; when he declines, she gives him a vial of coaxium, enough to buy a ship of his own. Han and Chewbacca locate Lando and challenge him to a rematch in sabacc, once again wagering the Falcon. Han wins, having stolen the card Lando was keeping up his sleeve in order to cheat, and he and Chewbacca leave for Tatooine, where a "big-shot gangster" is putting together a job.

Retrieved from "https://movies.fandom.com/wiki/Solo:_A_Star_Wars_Story?oldid=268153"
Community content is available under CC-BY-SA unless otherwise noted.