Start a Wiki
watch 01:48
The Loop (Movies)
Do you like this video?
Son of Frankenstein 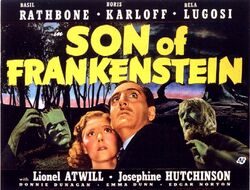 The film was a reaction to the very popular re-releases of Dracula and Frankenstein as a double-feature in 1938. Universal's declining horror output was revitalized with the enormously successful Son.

It's been years since the events of the last movie. Baron Wolf von Frankenstein (Basil Rathbone), son of Henry Frankenstein (creator of the Monster), relocates his wife Elsa (Josephine Hutchinson) and young son Peter (Donnie Dunagan) to the family castle in the eponymous village. Wolf wants to redeem his father's reputation, but finds that such a feat will be harder than he thought after he encounters hostility from the villagers. Aside from his family, Wolf's only friend is the local policeman Inspector Krogh (Lionel Atwill) who bears an artificial arm, his real arm having been "ripped out by the roots" in an encounter with the Monster as a child.

While investigating his father's castle, Wolf ends up meeting Ygor (Béla Lugosi), a demented blacksmith who has survived a hanging for graverobbing and has a deformed neck as a result. Wolf finds the Monster's comatose body in the crypt where his father was buried with the chalk writing on his stone casket stating "Henry Frankenstein: Maker of Monsters." He decides to revive it to prove his father was right and to restore honor to his family. Wolf starts out by using the torch to etch out the Monster's part of the chalk writing and write "Men" in its place. When the Monster (Boris Karloff) is revived, it only answers Ygor's wishes and commits a series of murders at his command; the victims were all jurors at Ygor's trial. Wolf discovers this and confronts Ygor. Wolf ends up shooting Ygor, and apparently killing him. The Monster finds Ygor's body and abducts Peter as revenge. The Monster cannot bring himself to kill the child, however. When the abduction is discovered, Krogh and Wolf pursue the Monster to the nearby laboratory, where a struggle ensues, during which the Monster tears out Krogh's false arm. Wolf swings on a rope and knocks the Monster into a molten sulphur pit under the laboratory, saving his son.

The film ends with the village turning out to cheer the Frankenstein family as they leave by train to head back to America. We also see Krogh has a new false arm. Wolf leaves the keys to Frankenstein's Castle to the villagers.

After the dissolve of the Laemmles with Universal and the British embargo on American horror films in 1936, Karloff and Lugosi found themselves in a career slump. For two years, horror films were out of the New Universal Studios line up. On April 5, 1938, a nearly bankrupt theatre in Los Angeles staged a desperate stunt by booking Frankenstein and Dracula on a double bill. The result became a phenomenon and soon, Universal decided to make a big budget version of the next Frankenstein sequel.

Son of Frankenstein marks changes in the Monster's character from Bride of Frankenstein. The Monster is duller and no longer speaks. The monster also wore a giant fur vest, not seen in the first two Frankenstein films. He is fond of Ygor and obeys his orders. Unlike the previous two films, the Monster only shows humanity in two scenes: first when he discovers Ygor's body, letting out a powerful scream and later when he contemplates killing Peter but changes his mind.

Peter Lorre was originally cast as Baron Wolf von Frankenstein, but he had to leave the production when he became ill. Replacing Lorre was Basil Rathbone, who had scored a major trimuph as Sir Guy of Gisborne, in The Adventures of Robin Hood.

According to the documentary Universal Horror (1998), the film was intended to be shot in color. Test shooting took place but the monster's make-up did not look good enough and the idea was abandoned. Color clips of Boris Karloff in monster make-up clowning around are included in the documentary.

Retrieved from "https://movies.fandom.com/wiki/Son_of_Frankenstein?oldid=118450"
Community content is available under CC-BY-SA unless otherwise noted.