Start a Wiki
watch 01:48
The Loop (Movies)
Do you like this video?
Sonic the Hedgehog 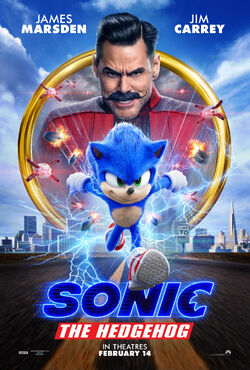 Sonic the Hedgehog is a 2020 American live-action animated film based on the Sonic video game franchise series published by Sega. It is written by Patrick Casey, Josh Miller and Oren Uziel from a story by Van Robichaux and Evan Susser, and directed by Jeff Fowler in his directoral debut. The film stars Ben Schwartz as Sonic the Hedgehog and Jim Carrey as Sonic's nemesis Dr. Ivo Robotnik, alongside James Marsden as Tom Wachowski, Tika Sumpter, Natasha Rothwell, Adam Pally, and Neal McDonough.

The film was released on February 14, 2020 by Paramount Pictures.

Sonic is an extraterrestrial blue hedgehog who can run at supersonic speeds. His caretaker, Longclaw the Owl, encourages him to hide his powers, but Sonic does not listen, resulting in a tribe of echidnas attempting to abduct him. Longclaw gives Sonic a bag of rings which open portals to other planets, using one to send him to Earth while she holds off the echidnas. Sonic spends the next ten years living in secret in the town of Green Hills, Montana. He idolizes the local sheriff, Tom Wachowski, and his veterinarian wife, Maddie. Tom has recently been hired by the San Francisco Police Department and is preparing to move.

Although he enjoys his life, Sonic longs for real friends. One night, he plays baseball by himself and, after realizing his loneliness, becomes upset and starts running around the field. The energy Sonic emits creates an electromagnetic pulse that knocks out power across the Pacific Northwest. The United States Department of Defense enlists roboticist and scientific genius Dr. Robotnik to help discover the cause of the outage. Robotnik discovers and tracks Sonic, who hides in the Wachowskis' shed. Just as he is opening a portal to escape through, Sonic is discovered and shot with a tranquilizer by Tom, causing him to drop his bag of rings through the portal, which leads to San Francisco. After Sonic awakens, Tom reluctantly agrees to help Sonic recover the rings. Robotnik invades the house, but Sonic and Tom escape. Robotnik comes across one of Sonic's quills and has Tom declared a domestic terrorist.

Tom and Sonic narrowly evade Robotnik and grow closer as they journey to San Francisco. Tom learns of Sonic's desire to make at least one real friend. Meanwhile, Robotnik slowly loses his sanity as his search for Sonic becomes more obsessive. Sonic disapproves of Tom's decision to leave Green Hills, arguing that he is leaving his true friends. Sonic is injured by one of Robotnik's drones shortly before the two arrive in San Francisco, where Tom is reunited with Maddie. Maddie helps revive Sonic, and the three travel to the Transamerica Pyramid, where Sonic's bag of rings landed. Robotnik and his robots attack them at the top, but Sonic uses the rings to teleport Tom and Maddie back to Green Hills before taking on Robotnik. Using the power of Sonic's quill, Robotnik achieves supersonic speed and pursues Sonic across the world.

Robotnik and Sonic's fight eventually makes it back to Green Hills, where Robotnik overpowers Sonic. However, Tom intervenes, and Sonic regains his strength after Tom refers to him as a friend. Sonic reclaims the energy that Robotnik is using. With help from Tom, Sonic uses a ring to send Robotnik to a planet made of mushrooms. With Robotnik defeated, Tom and Maddie decide to stay in Green Hills and let Sonic live in their house with them. The US government erases all evidence of the incident, including records of Robotnik's existence. However, Robotnik, still in possession of Sonic's quill, begins plotting his revenge.

In a mid-credits scene, Tails, a fox from Sonic's world, emerges from a ring portal in search of Sonic.

Sony Pictures Entertainment originally acquired the rights to distribute a film based on Sonic the Hedgehog in 2013. On June 10, 2014, a live-action animated film based on Sonic the Hedgehog was announced as a joint venture between Sony Pictures and Marza Animation Planet. It would be produced by Neal H. Moritz by his Original Film banner alongside Takeshi Ito, Mie Onishi, and Toru Nakahara and written by Evan Susser and Van Robichaux. In February 2016, Sega CEO Hajime Satomi stated the film was scheduled for 2018. Blur Studio's Tim Miller and Jeff Fowler were hired in 2016 to develop the film; Fowler would make his directorial debut, and both Miller and Fowler would executive produce. Patrick Casey and Josh Miller were writing the screenplay.

On October 2, 2017, Paramount Pictures announced that they had acquired the rights after Sony Pictures' Columbia Pictures put the film into turnaround. However, most of the production team remained unchanged. In February 2018, it was announced that the movie would have a November 2019 release.

On May 29, 2018, it was reported that Paul Rudd was in talks for a lead role as Tom, "a cop who befriends Sonic and will likely team up to defeat Dr. Eggman," but was later denied. A day later, it was announced that James Marsden was cast in an undisclosed role, but later revealed to be Tom Wachowski. In June 2018, Tika Sumpter was cast in the role of the wife of Tom Wachowski. Jim Carrey was cast to play the villain, Dr. Robotnik. In August 2018, Ben Schwartz joined the cast of the film voicing the titular character. A few days later, Adam Pally and Neal McDonough were cast. Debs Howard and Elfina Luk already joined the cast.

Principal photography took place from July 30, 2018 and ended in Vancouver, British Columbia, Ladysmith and Vancouver Island on October 16, 2018. Post-production began and ended in October in New York, where Jim Carrey shot his scenes.

The visual effects are provided by Industrial Light & Magic (ILM), Blur Studio, Digital Domain and the Moving Picture Company (MPC).[31] The production team created a realistic version of Sonic, adding fur, new running shoes, two separate eyes,[32] and a more human-like physique.[33] They used Ted, the living teddy bear from the Ted films, as a reference to insert a CG character into a real-world setting. Executive producer Tim Miller said: "It would be weird and it would feel like he was running around nude if he was some sort of otter-like thing. It was always, for us, fur, and we never considered anything different. It's part of what integrates him into the real world and makes him a real creature." According to Miller, Sega was not "entirely happy" with the design of Sonic's eyes.[32] Its humanoid appearance has been described as evoking an uncanny valley-type of revulsive response by viewers.

On May 2, 2019, two days after the trailer's release, Fowler announced on Twitter that Sonic would be redesigned before the film's release in response to the audience backlash against the design in the first trailer, as well as to the fan edits that were much more well-received. The film's November release date originally remained unchanged, prompting concerns that a design overhaul of the main character would cause the visual effects teams to be overworked, but on May 24, 2019, Fowler announced on Twitter that the film was pushed back to February 14, 2020.

Sonic the Hedgehog was initially scheduled for 2018 by Columbia Pictures; however in February 2018, Paramount Pictures rescheduled it to November 15, 2019.[22][55] The film was later moved up a week earlier to November 8, 2019.[56] In May 2019, director Jeff Fowler announced that the film would again be delayed, this time to February 14, 2020, in order to "make Sonic just right" following announcement of the character's redesign.

Sonic the Hedgehog received mixed to positive reviews from critics. On Rotten Tomatoes, The film has a score of 64% based on 191 reviews with an average score of 5.78/10.

Current release poster
Add a photo to this gallery

Retrieved from "https://movies.fandom.com/wiki/Sonic_the_Hedgehog?oldid=244347"
Community content is available under CC-BY-SA unless otherwise noted.