Sonic the Hedgehog
by: Sega

for action, some violence, rude humor, and mild language

Sonic the Hedgehog 3
Sonic the Hedgehog 2 is a 2022 American-Japanese live-action/computer animated action adventure comedy film adapted by the video game of the same name made by Masahoru Yoshii and was based on the video game series "Sonic the Hedgehog" made by Sega. It is a sequel to the Sonic the Hedgehog (2020), it was again directed by Jeff Fowler, from a screenplay by Pat Casey, Josh Miller, and John Whittington (who both Casey and Miller are in story writers). The film stars Ben Schwartz, James Marsden, Tika Sumpter, Natasha Rothwell, Adam Pally, Colleen O'Shaughnessey, Shemar Moore, Lee Majdoub, Idris Elba, and Jim Carrey, the film takes place to Green Hills City after the events of the first film, Sonic was been side with Tails who teaming up to find the Master Emerald at the secret cave before Knuckles and Dr. Robotnik do, with all of the military organization being contending called "G.U.N."

The film was released on April 8, 2022 in the United States by Paramount Pictures, the film received mixed reviews, who was deemed improvement than its predecessor. While it grossed $72.1 million in the opening weekend, $190.9 million in the United States, $211 million in the international, for the worldwide total of $401.9 million at the box office against its $90-110 million, this film is actually considered box office success. A third film and a spinoff series focuses on Knuckles is in development.

On the mushroom planet, Dr. Robotnik is recovering from his most recent failed escape attempt. Just then a Ring Portal opens with Knuckles, a red echidna warrior, stepping through. Knuckles promises to help Robotnik return to Earth, in exchange for telling him the location of Sonic.

Meanwhile on Earth, Sonic attempts to use his powers to work as vigilante; this becomes complicated when his attempt to stop a robbery accidentally destroys a Seattle city block and almost injures several people. Later on Sonic's adopted father, Tom, takes him fishing for a chat; Tom tells Sonic he is still just a kid and to remain patient until one day his powers will be needed.

Tom and his wife Maddie depart to Hawaii where her sister Rachel is due to get married, thus leaving Sonic home alone. As he spends his night partying, Sonic comes face-to-face with Robotnik before meeting Knuckles when the latter attacks him. Sonic then fights Knuckles and is taken about when Knuckles demands to know the location of the Master Emerald, a powerful relic that grants the user the power to devastate entire armies - which piques Robotnik's interest in the process. Sonic manages to escape Knuckles thanks to the intervention of Tails, a two-tailed fox who can spin his tails to fly.

Afterwards, Sonic and Tails greet each other. Tails then explains to Sonic that he has been watching him with gadgets, which Tails himself had invented, ever since Sonic had caused the electromagnetic pulse at the baseball field and was thereafter inspired by his bravery in battling Robotinik. Impressed by his genius, Sonic convinces Tails to help him reach the Master Emerald before Robotnik does first. At the same time, Robotnik promises to help Knuckles look for the Master Emerald in exchange for killing Sonic. Later on Robotnik reunites with Agent Stone before regaining his old technology and robots.

Sonic and Tails find a hidden message from Longclaw in her old map telling of her former role to protect the Master Emerald from the power-hungry Echidna tribe and that a compass revealing the location of the emerald lies in Siberia. The two find the compass and a temple created by the Owl Tribe, but are then ambushed by Robotnik and Knuckles. Another confrontation ensues between Sonic and Knuckles, during which Knuckles reveals that he is the sole survivor of the echidna tribe after they and the Owls both wiped each other out; since then Knuckles has blamed Longclaw for what happened and has been targeting Sonic to avenge his tribe, seeing Sonic as Longclaw's apprentice. Before Sonic can talk Knuckles down, Robotnik knocks Tails out and steals the compass before leaving with Knuckles as an avalanche starts. Sonic calls Tom to activate his spare ring to save them, interrupting the ongoing wedding. Sonic introduces Tom to Tails and explains the situation before the three are captured by the wedding goers, which were secretly agents working for the newly established Guardian Units of Nations (G.U.N) to combat alien forces such as Sonic; the wedding had been a façade that G.U.N engineered to monitor Tom and Maddie for information on Sonic's whereabouts.

Not long afterwards, Maddie and Rachel rescue Sonic, Tails and Tom from G.U.N by using the gadgets Tails had left from his dropped bag. In the meantime, Robotnik and Knuckles find the underwater temple containing the Master Emerald. The temple's awakening shoots a green beam into the sky, alerting Sonic to the imminent danger and showing G.U.N of the greater threat that Eggman poses. Sonic goes to the temple alone, worrying about getting anyone else hurt, and confronts Knuckles at the Emerald alter. As the two fight in equalled hand-to-hand combat, Robotnik steals the emerald and becomes all-powerful; he then betrays Knuckles by leaving him to die with Sonic in the collapsing temple. Sonic and Knuckles assist each other in escaping, after which they talk about losing their families on the same day before agreeing to put their differences aside. The two resolve to work together to defeat Robotnik and retake the Master Emerald as Tails recues them in a biplane.

Robotnik teleports to Green Hills and uses his newfound power to disassemble the G.U.N armies vehicles and create a giant mech version of himself. Sonic, Tails and Knuckles work together to fight the mech. Sonic distracts Robotnik, while Tails blasts into the mech's head and Knuckles steals the Emerald back however in the fight, the Master Emerald is shattered into the seven Chaos Emeralds, Sonic is badly injured and almost crushed by the mech before he is rescued by Tom and Maddie in a car. Robotnik, using the mech's backup power, destroys the car and goes to crush them before Sonic uses the Chaos Emeralds to transform into Super Sonic which turns him gold, allows him to fly and vastly improves his strength. Super Sonic destroys the mech and it crashes with Robotnik still on it. Sonic reverts back to normal and returns the emeralds to Knuckles who recreates the Master Emerald. With the Owls and Echidnas long gone, Sonic, Tails and Knuckles decide to be the Master Emerald's new guardians and keep it hidden with them in a cooler as the trio bond over a baseball game with Tom and Maddie.

In a post-credits scene, G.U.N fails to find Robotnik's body in the crash and presume him dead. As they go to erase his file, the organization uncovers a hidden 50-year old file named Project Shadow as a capsule containing a black-and-red hedgehog opens in a secret facility. 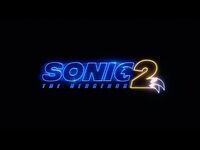 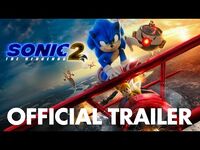 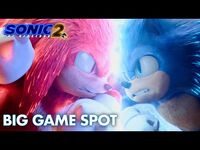 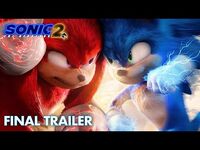