watch 00:59
The Loop (Movies)
Do you like this video?
Southpaw 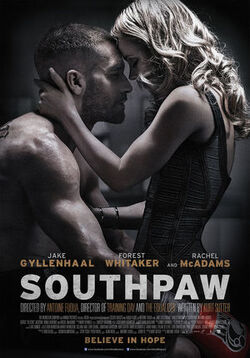 Southpaw is a 2015 American sports drama film directed by Antoine Fuqua and written by Kurt Sutter. The film stars Jake Gyllenhaal, Forest Whitaker, and Rachel McAdams. The film was released on July 24, 2015.

Billy "The Great" Hope (Jake Gyllenhaal), the reigning junior middleweight boxing champion, has an impressive career, a loving wife and daughter, and a lavish lifestyle. However, when tragedy strikes, Billy hits rock bottom, losing his family, his house and his manager. He soon finds an unlikely savior in Tick Willis (Forest Whitaker), a former fighter who trains the city's toughest amateur boxers. With his future on the line, Hope fights to reclaim the trust of those he loves the most.

Retrieved from "https://movies.fandom.com/wiki/Southpaw?oldid=162380"
Community content is available under CC-BY-SA unless otherwise noted.