Moviepedia
Register
Don't have an account?
Sign In
Advertisement
in: Pages with reference errors, Rated PG, Films,
and 40 more 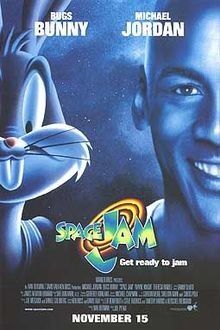 Space Jam is a 1996 American live-action/animated sports comedy film starring Michael Jordan opposite Bugs Bunny and the rest of the Looney Tunes characters. It was produced by Ivan Reitman, and directed by Joe Pytka and Tony Cervone and Bruce W. Smith.

Space Jam was the first film to be produced by Warner Bros. Feature Animation, and was released theatrically in the United States on November 15, 1996, by Warner Bros. under their Family Entertainment banner. The film received anonymous box office success, grossing $230 million against the budget is $80 million and was mixed reviews from critics who were divided over its premise of combining Jordan and his profession with the Looney Tunes characters, although the technical achievements of its intertwining of live-action and animation were praised. Space Jam was also converted in a pinball and a video game by Acclaim Entertainment for PC-DOS, Sega Saturn and PlayStation. The spinoff film of Looney Tunes named Looney Tunes: Back in Action released in November 14, 2003 with Brendan Fraser, the direct-to-video film crossover between Teen Titans Go and Monstars conclude Teen Titans Go! See Space Jam was available on DVD and on aired on Cartoon Network in June 2021, and following a modern/standalone sequel of a 3D/2D creation film Space Jam: A New Legacy released in July 16, 2021 starring LeBron James and the Looney Tunes Returns on it but Barnyard Dawg and Pepe Le Pew getting removed by Warner Bros. due to the rise of delta and cancel culture on Twitter.

In 1973, a young Michael Jordan tells his father, James, about his dreams of playing in the NBA. Twenty years later (1993), following his father's death, Jordan announces his retirement from basketball and pursues a baseball career.

Meanwhile, in outer space, the amusement park Moron Mountain is in decline. Mr. Swackhammer, the park's proprietor, learns of the Looney Tunes from his minions, the Nerdlucks, and tasks them with abducting them as attractions. Upon their arrival beneath Earth's surface, Bugs Bunny and the other Looney Tunes note the Nerdlucks' small stature and challenge them to a basketball game despite their lack of experience. After learning more of basketball, the Nerdlucks infiltrate various games, usurping the talents of Charles Barkley, Shawn Bradley, Patrick Ewing, Larry Johnson, and Muggsy Bogues. The Nerdlucks use these talents to transform into large, muscular versions of themselves, whom Sylvester refers to as Monstars. The easily intimidated Looney Tunes realize their need for professional help.

While golfing with Bill Murray, Larry Bird, and his assistant, Stan Podolak, Jordan is taken into the Looney Tunes' universe. Bugs explains their situation to Jordan, who is initially reluctant to return to basketball. However, Jordan agrees after a confrontation with the Monstars, and forms the Tune Squad with the Looney Tunes; they are joined by Lola Bunny, with whom Bugs becomes enamored. Unprepared for basketball, Jordan sends Bugs and Daffy Duck back to his house to obtain his basketball gear. They are aided by Jordan's children, who agree to keep the game a secret; and are later seen by Stan, who follows them back to their world and joins the team. Meanwhile, the incapacity of the five NBA players results in national panic that culminates in the season's indefinite suspension. The players try to restore their skills through various methods, to no avail.

With ten seconds left in the game, the Tune Squad are down by one point and one player, with only Jordan, Bugs, Lola, and Daffy still able to play. Murray unexpectedly arrives and joins the game. In the final seconds, Jordan gains the ball with Murray's help but is pulled back by the Monstars. On Bugs' advice, Jordan uses cartoon physics to extend his arm and achieve a slam dunk, winning the match with a buzzer beater. After Swackhammer scolds the Monstars, Jordan helps them realize that they only served him because they were once smaller. They encase Swackhammer inside a missile that is sent to the Moon. After relinquishing their talent, the Nerdlucks join the Looney Tunes and return Jordan to Earth.

Jordan later returns their talent to the incapacitated players, whose remarks convince Jordan to return to the NBA and resume his basketball career.

Reviews of the movie were generally negative. Many critics compared it unfavorably to Who Framed Roger Rabbit, a popular film in which cartoon characters and live-action humans coexisted in the same film as well.[1] Basketball fans thought the movie to be demeaning to the sport, and to Michael Jordan himself.

Those who liked the film praised the visual effects, which were groundbreaking at the time. Roger Ebert was among the few major critics to give Space Jam an enthusiastic "thumbs up." Some of his readers theorized that Ebert did so because he works in Chicago, and therefore would be supportive of any of Michael Jordan's endeavours. Leonard Maltin also gave the film a positive review.

Despite the negative press, the film served as a high point for musical artist R. Kelly, whose song "I Believe I Can Fly" became a hit after it was featured on the film's soundtrack. Other notable musical numbers appearing in the film include a cover of Fly Like an Eagle (by Seal), Hit 'em High (Monstar's Anthem) (by B-Real, Coolio, Method Man, LL Cool J, and Busta Rhymes), and For You I Will (by Monica). Template:See

A sequel to Space Jam was planned as early as 1997. As development began, Space Jam 2 was going to involve a new basketball competition between the Looney Tunes and a new villain named Berserk-O!. Artist Bob Camp was tasked with designing Berserk-O! and his henchmen. Joe Pytka would have returned to direct and Spike Brandt and Tony Cervone signed on as the animation supervisors. However, Michael Jordan did not agree to star in a sequel. According to Camp, a producer lied to design artists by claiming that Jordan had signed on in order to keep development going. Warner Bros. eventually canceled plans for Space Jam 2.[1] The film then reentered development as Spy Jam and was to star Jackie Chan in a different script. The studio was also planning a film titled Race Jam which would have starred Jeff Gordon. Additionally, Space Jam director Joe Pytka revealed that following the first film's success, he had been pitched a story for a sequel that would have starred professional golfer Tiger Woods, with Jordan in a smaller role. Pytka explained how the idea came from an out of studio script conference, with people who worked on the original film allegedly involved.[2][3] Producer Ivan Reitman was reportedly in favor of a film which would again star Jordan.[4] The follow-up films were ultimately cancelled in favor of Looney Tunes: Back in Action (2003). A film titled Skate Jam was in early development with Tony Hawk in the starring role. Plans were underway for production to begin immediately following the release of Looney Tunes: Back in Action, but was cancelled given the poor financial reception to said film despite improved critical reception.[5]

In February 2014, Warner Bros. officially announced development of a sequel that will star LeBron James. Charlie Ebersol was set to produce, while Willie Ebersol wrote the script.[6] By May of the same year, James was quoted as saying, "I've always loved Space Jam. It was one of my favorite movies growing up. If I have the opportunity, it will be great."[7] In July 2015, James and his film studio, SpringHill Entertainment, signed a deal with Warner Bros. for television, film and digital content after receiving positive reviews for his role in Trainwreck.[8][9][10] By 2016, Justin Lin signed onto the project as director, and co-screenwriter with Andrew Dodge and Alfredo Botello.[11] In November 2016, a teaser trailer in the form of a Nike advertisement, was released on Twitter under #MonstarsBack.[12] Later in December, Bugs Bunny and the Monstars appeared in a Foot Locker commercial starring Blake Griffin and Jimmy Butler.[13][14] By August 2018, Lin left the project, and Terence Nance was hired to direct the film.[15] In September 2018, Ryan Coogler was announced as a producer for the film. SpringHill Entertainment released a promotional teaser image officially announcing the film,[16] with production set to begin on June 17, 2019 during the NBA off-season.[17] Filming will take place in California[18][19][20][21][22][23][24] and will shoot within a 30 mile radius of Los Angeles.[25][20][24] Prior to production, the film received $21.8 million in tax credits as a result of a new tax incentive program from the state.[19][26][27][28][29][30][31][28][19] By February 2019, after releasing the official logo with a promotional poster, the film studios involved have Space Jam 2 scheduled for release on July 16, 2021.[32][33]

Before that film's release, Dwayne Johnson joined that cast as a reprising the role of himself with third instalment is gonna development while involved as the lead, transitioning on the sports genre from basketball to professional wrestling.[2]