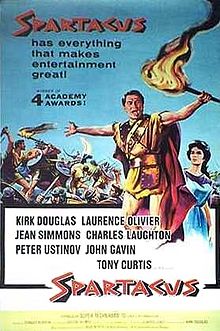 Spartacus is a 1960 epic historical drama film that was directed by Stanley Kubrick. As with most Kubrick films, it initially received mixed reviews, but is today regarded as one of his finest early films. A famous quote from the film, "I'm Spartacus!" has become a staple in popular culture; it has been spoofed and parodied various times.

Thracian Spartacus is born and raised a slave, and is sold to a Gladiator trainer. More slaves work in the Roman province of Libya. After being trained to kill for the arena, Spartacus rebels against his owners, leading the other slaves in his rebellion as well. The gladiator slaves take Capua and the surrounding districts. After that, they escape and their numbers swell because more and more slaves join them. The They make their way to southern Italy, where they will return to their homes.

Two other nominations were Best Music, Scoring of a Dramatic or Comedy for Alex North and Best Film Editing for Robert Lawrence.

Retrieved from "https://movies.fandom.com/wiki/Spartacus?oldid=60960"
Community content is available under CC-BY-SA unless otherwise noted.