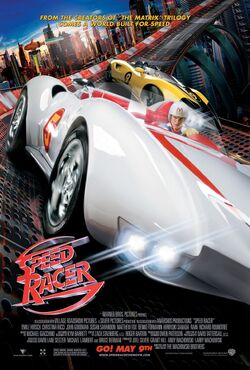 Speed Racer is a 2008 American action film based on the Japanese anime and manga series Speed Racer by Tatsunoko Productions. The film was written and directed by The Wachowskis, and stars Emile Hirsch, Christina Ricci, John Goodman, Susan Sarandon, Matthew Fox, Benno Fürmann, Hiroyuki Sanada, Rain and Richard Roundtree. The plot revolves around Speed Racer, a 18-year-old automobile racer, who follows his apparently deceased brother's career. He is very loyal to his family, particularly to his father, Pops, who is a man of solid convictions. However, these convictions lead the enmity of Mr. Royalton, a business man, after Speed refuses a contract offered by him.

The film had been in development since 1992, changing actors, writers and directors until in 2006 producer Joel Silver and the Wachowskis collaborated to begin production on Speed Racer as a family film. Speed Racer was shot between early June and late August 2007 in and around Potsdam and Berlin, at an estimated budget of $120 million. The film score was composed by Michael Giacchino, and the film's soundtrack, which contains the sound effects and theme song from the original series, was released on May 6, 2008.

Speed Racer premiered on May 3, 2008 at the Tribeca Film Festival, and was released in the United States on May 9, 2008. The film received negative reviews. Speed Racer was criticized for its storyline, characters, dialogues, and for being very childish, while the film was praised for its capacity to entertain the target audience and its cast performance. Speed Racer was noted to use overmuch special effects by some critics that criticized it, while others praised its visual. It received nominations of awards that both qualified the film as one of the best in a certain category and as a Golden Raspberry Award.

Speed Racer (Emile Hirsch) is an 18-year-old whose life and love has always been automobile racing. His parents Pops (John Goodman) and Mom (Susan Sarandon) run the independent Racer Motors, in which his brother Spritle (Paulie Litt), mechanic Sparky (Kick Gurry), and girlfriend Trixie (Christina Ricci) are also involved. As a child Speed idolized his record-setting older brother, Rex Racer (Scott Porter), but Rex was disowned by Pops for his decision to join a corporate racing team and was publicly defamed for appearing to cheat in a race. He was then killed while racing in the Casa Cristo 5000, an intense cross-country racing rally notorious for rough and foul play. Now embarking on his own career, Speed Racer is quickly sweeping the racing world with his skill behind the wheel of his brother's car the Mach 5 and his own Formula One car the Mach 6, but remains primarily interested in the art of the race and the well-being of his family.

E.P. Arnold Royalton (Roger Allam), owner of conglomerate Royalton Industries, offers Speed an astoundingly luxurious lifestyle in exchange for signing to race with him. Speed is tempted but declines due to his father's distrust of power-hungry corporations. Angered, Royalton reveals that for many years the key races have been fixed by corporate interests, including Royalton himself, to gain profits. He threatens Speed's career and family, making good on these threats by having his drivers force Speed into a crash that destroys the Mach 6 and suing Racer Motors for intellectual property infringement. Speed decides that he must do something to stop Royalton and save the Racer business, and an opportunity to do so arises in the form of Inspector Detector (Benno Fürmann), head of a corporate crimes division. Racer Taejo Togokahn (Rain) claims to have evidence that could indict Royalton but will only offer it up if Speed and the mysterious masked Racer X (Matthew Fox) agree to race on his team in the Casa Cristo 5000. Taejo claims that a win could substantially raise the stock price of his family's racing business, blocking a Royalton-arranged buyout. Speed agrees but keeps his decision secret from his family, and Inspector Detector's team makes several defensive modifications to the Mach 5 to assist Speed in the rally.

After they drive together and work naturally as a team, Speed begins to suspect that Racer X is actually his brother Rex in disguise. His family discovers that he has entered the race and agree to support him. With the help of his family and Trixie, Speed defeats many brutal racers who have been bribed by fixer Cruncher Block (John Benfield) to stop him, and overcomes seemingly insurmountable obstacles to win the race. However, Taejo's arrangement is revealed to be a sham, as he was only interested in increasing the value of his family's company so that they could profit from Royalton's buyout. An angry Speed hits the track that he used to drive with his brother, and confronts Racer X with his suspicion that he is Rex. Racer X removes his mask, revealing an unfamiliar face, and tells Speed that Rex truly is dead. Speed returns home, where Taejo's sister Horuko Togokahn (Yu Nan) gives him Taejo's automatic invitation to the Grand Prix. The Racer family bands together and builds the new Mach 6 in 32 hours.

Speed enters the Grand Prix against great odds: Royalton has placed a bounty on his head that the other drivers are eager to collect, and he is pitted against legendary Hall of Fame driver Jack "Cannonball" Taylor (Ralph Herforth). Speed overcomes a slow start to catch up with Taylor, who uses a cheating device called a spearhook to latch the Mach 6 to his own car. Speed uses his jump jacks to expose the device to video cameras and cause Taylor to crash. Speed wins the race, having successfully exposed Royalton's crimes. Racer X, who is watching, reveals through a flashback montage that he is indeed Rex, having faked his death and undergone plastic surgery to change his appearance as part of his plan to save his family and the sport of racing. He chooses not to reveal his identity to his family, declaring that he must live with his decision. The Racer family celebrates Speed's victory as Speed and Trixie kiss, and Royalton is sent to jail.