watch 01:56
The Loop (Movies)
Do you like this video?
Play Sound
Spencer Tracy 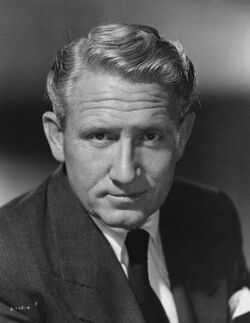 Spencer Bonaventure Tracy (April 5, 1900 – June 10, 1967) was an American actor. One of the major stars of Hollywood's Golden Age, Tracy was nominated for nine Academy Awards for Best Actor and won two. He appeared in films such as Fury, Dr. Jekyll and Mr. Hyde, A Guy Named Joe, The Old Man and the Sea, It's a Mad, Mad, Mad, Mad World and Guess Who's Coming to Dinner.

Retrieved from "https://movies.fandom.com/wiki/Spencer_Tracy?oldid=130740"
Community content is available under CC-BY-SA unless otherwise noted.