Black Widow (MCU)
Spider-Man: No Way Home (series)
Spider-Man: Far From Home is a 2019 American superhero film based on the Marvel Comics character Spider-Man, co-produced by Columbia Pictures and Marvel Studios, and distributed by Sony Pictures Releasing. It is the sequel to Spider-Man: Homecoming (2017) and the 23rd film in the Marvel Cinematic Universe (MCU). The film was directed by Jon Watts, written by Chris McKenna and Erik Sommers, and stars Tom Holland as Peter Parker / Spider-Man, alongside Samuel L. Jackson, Zendaya, Cobie Smulders, Jon Favreau, J. B. Smoove, Jacob Batalon, Martin Starr, Marisa Tomei, and Jake Gyllenhaal. In the film, Parker is recruited by Nick Fury and Mysterio to face the Elementals while he is on a school trip to Europe.

Discussions for a sequel to Spider-Man: Homecoming began by October 2016, and the project was confirmed later that year. Holland, Watts, and the writers were all set to return by the end of 2017. In 2018, Jackson and Gyllenhaal joined the cast as Fury and Mysterio, respectively. Holland revealed the sequel's title ahead of filming, which began that July and took place in England, the Czech Republic, Italy, and the New York metropolitan area. Production wrapped in October 2018. The marketing campaign was the most expensive for a film ever and attempted to avoid revealing spoilers for Avengers: Endgame prior to its April 2019 release.

In Ixtenco, Mexico, Nick Fury and Maria Hill investigate an unnatural storm and encounter the Earth Elemental. Quentin Beck, a super-powered individual, arrives to defeat the creature. Beck subsequently defeats the Elemental and is recruited by Fury and Hill. In New York City, the Midtown School of Science and Technology completes its year, which was restarted to accommodate the students who previously disintegrated five years earlier as a result of Thanos' actions. They had reappeared un-aged, thanks to the actions of the Avengers. The school organizes a two-week summer field trip to Europe, where Peter Parker—who is still mourning the death of his mentor Tony Stark—plans to reveal to classmate MJ his attraction to her. Happy Hogan informs Parker that Fury intends to contact him, but Parker ignores Fury's phone call.

Parker and his classmates travel to Venice, Italy, where the Water Elemental attacks. Parker helps protect his classmates, while Beck arrives and defeats the creature. Fury meets with Parker and gives him Stark's glasses, which were meant for his successor. The glasses enable him to communicate with and take command of the artificial intelligence E.D.I.T.H., which has access to Stark Industries' databases and commands a large orbital weapons supply. Beck claims to hail from an alternate reality within the Multiverse, where the four Elementals killed his family and destroyed his civilization. With only the Fire Elemental left to destroy, Beck predicts it will attack Prague. Parker declines Fury's invitation to join the fight and returns to his class trip.

Fury secretly changes the class's itinerary to divert the students to Prague. There, Parker is forced to help Beck fight the Fire Elemental to again protect his friends. Beck manages to destroy the creature with Parker's help. Fury and Hill invite Parker and Beck to Berlin to discuss the formation of a new superhero team, but Parker decides that Beck should go alone and transfers control of E.D.I.T.H. to him. Once Parker leaves, Beck celebrates alongside ex-Stark Industries employees, with whom he had been working to masquerade as a superhero. Beck, who was fired from his position as Stark's holographic-illusions specialist for his unstable nature, used advanced projectors to simulate his powers and the Elementals, and now hopes to use E.D.I.T.H.'s orbital weaponized drones to increase the scale of his illusions and fraudulently establish himself as an Avenger-level hero.

After MJ tells Parker she knows he is Spider-Man, they discover that a piece of debris she retrieved during the battle with the Fire Elemental is a projector which shows the Air Elemental, leading them to realize Beck's deception. Parker travels to Berlin to warn Fury, only to be tricked by Beck with an illusory Fury into revealing the names of his friends who know about Beck's plan. Left for dead by Beck, Parker contacts Hogan, who flies him to London, where his classmates are. Beck uses E.D.I.T.H. to orchestrate a fusion of all the Elementals, as a cover to kill Parker's friends. Parker is able to disrupt the illusions, so Beck attacks him with drones. Parker regains control of E.D.I.T.H. and defeats Beck, who is hit by a misfired gunshot from one of the drones; before he dies, Beck tells one of his associates to retrieve data from the drones. After returning to New York City, Parker begins a relationship with MJ.

In a mid-credits scene, J. Jonah Jameson of TheDailyBugle.net broadcasts doctored footage of the London incident in which Beck frames Spider-Man for the drone attack and his death, exposing Spider-Man's secret identity to the world, much to Parker's shock. In a post-credits scene, Fury and Hill are revealed to be the Skrulls Talos and Soren in disguise, under orders from the real Fury while he is away commanding a Skrull spaceship.

Tony Revolori and Angourie Rice reprise their roles from Homecoming as Parker's classmates Eugene "Flash" Thompson, Parker's rival, and Betty Brant, Ned's on-and-off girlfriend. Peter Billingsley reprises his Iron Man (2008) role of scientist William Ginter Riva, a former employee of Stark Industries who now works with Beck. J. K. Simmons appears as J. Jonah Jameson in the mid-credits scene, marking the first time an actor has reprised a non-MCU role in an MCU film after Simmons portrayed a different incarnation of Jameson in Sam Raimi's Spider-Man film trilogy. Simmons is signed to potentially appear in future films. Ben Mendelsohn and Sharon Blynn make uncredited cameo appearances in the post-credits scene as the Skrulls Talos and Soren, reprising their roles from Captain Marvel (2019); this scene reveals that they have been posing as Fury and Hill during the film, with deleted footage of Jackson and Smulders, originally intended for the opening scene, used in the reveal. Smulders learned about the twist from producer Kevin Feige shortly before the film's release.

Spider-Man: Far From Home grossed $390.5 million in the United States and Canada, and $741.4 million in other territories, for a worldwide total of $1.132 billion. On August 18, 2019, the film surpassed Skyfall (2012) to become Sony Pictures' highest-grossing film worldwide. Deadline Hollywood calculated the net profit of the film to be $339 million, accounting for production budgets, prints and advertising, talent participations and other costs, with box office grosses and ancillary revenues from home media, placing it seventh on their list of 2019's "Most Valuable Blockbusters".

Three weeks before its domestic release, official industry tracking had the film grossing around $170 million over its six-day opening frame. Some had the film reaching as high as $200 million, while others were at a conservative $165 million; Sony was predicting a $154 million debut. By the week of release industry estimates lowered to $140 million, with the studio expecting $120 million, due to the recent underperformance of other sequels. Playing in 4,634 theaters (second all-time behind Avengers: Endgame), Far From Home made a Tuesday-opening record $39.3 million, including an estimated $2.8–3 million from midnight previews at about 1,000 theaters. It then made $27 million on its second day, the best-ever Wednesday gross for an MCU film, and $25.1 million on Independence Day, the second highest ever total for the holiday behind Transformers ($29 million in 2007). In its opening weekend the film made $92.6 million, and a total of $185.1 million over the six-day frame, topping the $180 million made by Spider-Man 2 over its six-day July 4 opening in 2004. In its second weekend, the film made $45.3 million, again topping the box office with a 51% decrease from the first week; lower than Homecoming's 62% drop in its second box office weekend. Far From Home grossed over $21 million in its third weekend but was dethroned by newcomer The Lion King.

Far From Home was projected to gross around $350 million worldwide by the end of its first week of release, and about $500 million over its first 10 days. In China and Japan, where it was released a week prior to its U.S. debut, the film was expected to gross around a combined $90 million in its opening weekend. In China, where pre-sale tickets were less than Homecoming's, the film made $35.5 million on its first day, including $3.4 million from midnight previews (the fourth-best of all time for a superhero film in the country). It ended up slightly over-performing, debuting to $111 million including $98 million in China, the fourth-best-ever superhero opening in the country. Far From Homeended up grossing $580.1 million worldwide over its first 10 days of release, including $238 million from international territories in its opening weekend. In China, the film had a 10-day total of $167.4 million, and its other biggest debuts were South Korea ($33.8 million), the United Kingdom ($17.8 million), Mexico ($13.9 million) and Australia ($11.9 million).

On Rotten Tomatoes, the film holds a 91% approval rating based on 444 reviews, with an average rating of 7.40/10. The website's critics' consensus reads, "A breezily unpredictable blend of teen romance and superhero action, Spider-Man: Far From Home stylishly sets the stage for the next era of the MCU." Metacritic, which uses a weighted average, assigned the film a score of 69 out of 100 based on reviews from 55 critics, indicating "generally favorable reviews". Audiences polled by CinemaScore gave the film an average grade of "A" on an A+ to F scale, while those at PostTrak gave it a 90% overall positive score and a 76% "definite recommend".

In September 2019, Marvel Studios and Sony Pictures announced that they were set to produce a third film, after an impasse between the two companies during negotiations.Watts returned to direct, from a script by McKenna and Sommers. Holland, Zendaya, Tomei, Batalon, and Revolori reprise their roles, while Benedict Cumberbatch reprises his MCU role as Doctor Strange, Jamie Foxx reprises his role as Max Dillon / Electro from Marc Webb's The Amazing Spider-Man films, and Alfred Molina reprises his role as Otto Octavius / Doctor Octopus from Sam Raimi's Spider-Man trilogy. Spider-Man: No Way Home is scheduled to be released on December 17, 2021. 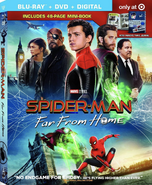 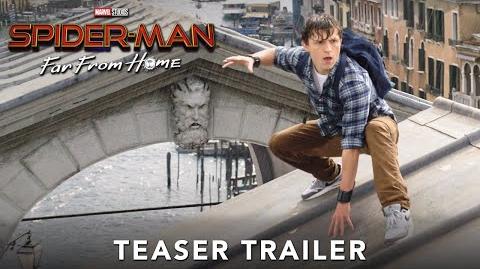