watch 03:27
Wiki Targeted (Entertainment)
Do you like this video?
Play Sound
Spider-Man: Homecoming 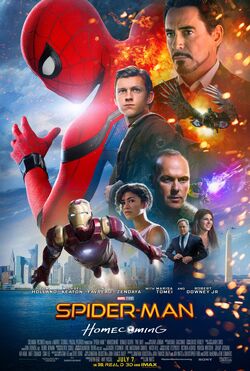 Following the Battle of New York, Adrian Toomes and his salvage company are contracted to clean up the city, but their operation is taken over by the Department of Damage Control (D.O.D.C.), a partnership between Tony Stark and the U.S. government. Enraged at being driven out of business, Toomes persuades his employees to keep the Chitauri technology they have already scavenged and use it to create and sell advanced weapons. Eight years later, Peter Parker is drafted into the Avengers by Stark to help with an internal dispute, but resumes his studies at the Midtown School of Science and Technology when Stark tells him he is not yet ready to become a full Avenger.

Parker quits his school's academic decathlon team to spend more time focusing on his crime-fighting activities as Spider-Man. One night, after preventing criminals from robbing an ATM with their advanced weapons from Toomes, Parker returns to his Queens apartment where his best friend Ned discovers his secret identity. On another night, Parker comes across Toomes' associates Jackson Brice / Shocker and Herman Schultz selling weapons to local criminal Aaron Davis. Parker saves Davis before being caught by Toomes and dropped in a lake, nearly drowning after becoming tangled in a parachute built into his suit. He is rescued by Stark, who is monitoring the Spider-Man suit he gave Parker and warns him against further involvement with the criminals. Toomes accidentally kills Brice with one of their weapons, and Schultz becomes the new Shocker.

Parker and Ned study a weapon left behind by Brice, removing its power core. When a tracking device on Schultz leads to Maryland, Parker rejoins the decathlon team and accompanies them to Washington, D.C. for their national tournament. Ned and Parker disable the tracker Stark implanted in the Spider-Man suit, and unlock its advanced features. Parker tries to stop Toomes from stealing weapons from a D.O.D.C. truck, but is trapped inside the truck, causing him to miss the decathlon tournament. When he discovers that the power core is an unstable Chitauri grenade, Parker races to the Washington Monument where the core explodes and traps Ned and their friends in an elevator. Evading local authorities, Parker saves his friends, including his fellow classmate and crush Liz. Returning to New York City, Parker persuades Davis to reveal Toomes' whereabouts. Aboard the Staten Island Ferry, Parker captures Toomes' new buyer Mac Gargan, but Toomes escapes and a malfunctioning weapon tears the ferry in half. Stark helps Parker save the passengers and takes away the suit as a result of his recklessness.

Parker returns to his high school life, and eventually asks Liz to go to the homecoming dance with him. On the night of the dance, Parker learns that Toomes is Liz’s father. Deducing Parker's secret identity from Liz's account about him, Toomes threatens retaliation if he interferes with his plans. During the dance, Parker realizes Toomes is planning to hijack a D.O.D.C. plane transporting weapons from Avengers Tower to the team's new headquarters, dons his old homemade Spider-Man suit and races to Toomes' lair. He is first ambushed by Schultz, but defeats him with the help of Ned. At the lair, Toomes destroys the building's support beams and leaves Parker to die. Parker escapes the rubble and intercepts the plane, steering it to crash on the beach near Coney Island. He and Toomes continue fighting, ending with Parker saving Toomes' life after the damaged Vulture suit explodes, and leaving him for the police along with the plane's cargo. After her father's arrest, Liz moves away, and Parker declines an invitation from Stark to join the Avengers full-time. Stark returns Parker's suit, which he puts on in his bedroom just as his Aunt May walks in.

In a mid-credits scene, an incarcerated Gargan approaches Toomes in prison. Gargan has heard that Toomes knows Spider-Man's real identity, which Toomes denies.

Retrieved from "https://movies.fandom.com/wiki/Spider-Man:_Homecoming?oldid=245290"
Community content is available under CC-BY-SA unless otherwise noted.