Start a Wiki
watch 01:27
The Loop (Movies)
Do you like this video?
Spider-Man: Into the Spider-Verse 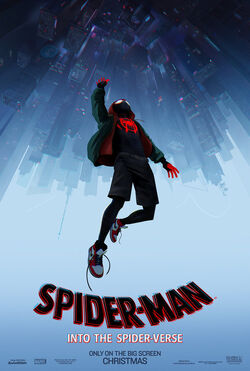 Spider-Man: Into the Spider-Verse is an upcoming American computer-animated superhero film based on the Marvel Comics character Miles Morales / Spider-Man, produced by Columbia Pictures and Sony Pictures Animation in association with Marvel Entertainment, and distributed by Sony Pictures Releasing. It is set in an alternate universe from Sony's other Spider-Man properties, but introduces a shared multiverse. The film is directed by Bob Persichetti, Peter Ramsey, and Rodney Rothman, from a screenplay by Phil Lord, and stars Shameik Moore as Morales alongside Hailee Steinfeld, Mahershala Ali, Jake Johnson, Liev Schreiber, Brian Tyree Henry, Luna Lauren Velez, and Lily Tomlin. In the film, Morales becomes one of many Spider-Men.

Retrieved from "https://movies.fandom.com/wiki/Spider-Man:_Into_the_Spider-Verse?oldid=136046"
Community content is available under CC-BY-SA unless otherwise noted.