$821,708,551
Spider-Man is a 2002 American superhero film directed by Sam Raimi. Based on the Marvel Comics character of the same name, the film stars Tobey Maguire as Peter Parker, a high-school student who turns to crimefighting after developing spider-like super powers. Spider-Man also stars Willem Dafoe as Norman Osborn (a.k.a. the Green Goblin), Kirsten Dunst as Peter's love interest Mary Jane Watson, and James Franco as his best friend Harry Osborn.

After being stuck in development hell for nearly 25 years, the film was licensed for a worldwide release by Sony Pictures Entertainment in 1999 after it acquired options from MGM on all previous scripts developed by Cannon Films, Carolco and New Cannon. Exercising its option on just two elements from this multi-script acquisition (a screenplay credited to James Cameron, Ted Newsom, John Brancato, Barney Cohen and "Joseph Goldman" (the pen name of Menahem Golan) and a later treatment credited solely to Cameron), Sony hired David Koepp to create a working screenplay from this "Cameron material". Directors Roland Emmerich, Tim Burton, Chris Columbus, and David Fincher were considered to direct the project before Raimi was hired as director in 2000. The Koepp script was rewritten by Scott Rosenberg during preproduction and received a dialogue polish from Alvin Sargent during production.

Filming of Spider-Man took place in Los Angeles, and New York City from January 8 to June 30, 2001. Spider-Man was released on May 3, 2002, and became a critical and financial success. With $821.7 million worldwide, it was 2002's third highest-grossing film and is the 41st highest-grossing film of all time. Reviews were largely positive with critics praising the film in several aspects. Spider-Man was, for its time, the only film to reach $100 million in its first weekend, had the largest opening weekend gross of all time, and was the most successful film based on a comic book. At the 75th Academy Awards ceremony, it was nominated the awards for Best Visual Effects and Best Sound Mixing. It also has two sequels, Spider-Man 2 and Spider-Man 3. A reboot titled The Amazing Spider-Man was released on July 3, 2012.

High-school senior Peter Parker visits a genetics laboratory with his friend Harry Osborn and Peter's love interest, Mary Jane Watson. There, Peter is bitten on the hand by a genetically engineered "super spider". Shortly after arriving home to his Aunt May and Uncle Ben, he is rendered unconscious. Meanwhile, Harry's father, scientist Norman Osborn, owner of Oscorp, is attempting to preserve his company's critically important military contract. He experiments on himself with a new but unstable performance-enhancing chemical vapor that increases his speed, strength, and stamina. However, it also drives him insane and he kills his assistant, Mendel Stromm. The next morning, Peter finds that his previously impaired vision has improved and that his body has metamorphosized into a more muscular physique. At school, he finds his body producing webbing and that his quickened reflexes let him avoid injury during a confrontation with bully Flash Thompson. Peter discovers he has developed superhuman speed, strength, the ability to stick to surfaces, and a heightened ability to sense danger.

Brushing off Uncle Ben's advice that "With great power comes great responsibility," Peter enters a wrestling tournament to get money to buy a car and impress Mary Jane. He wins his match, but the promoter cheats him out of the contest money. When a thief steals money from the promoter, Peter allows the thief to escape as revenge. He later discovers his Uncle Ben has been carjacked and shot dead. Peter confronts the carjacker only to realize it was the same thief he let get away. After Peter disarms him, the fleeing carjacker falls out a window and dies. Meanwhile, Norman Osborn kills several scientists and the military's General Slocum.

Upon graduating from school, Peter begins using his abilities to fight injustice, donning a costume and the persona of Spider-Man. Newspaper editor J. Jonah Jameson hires him as a freelance photographer, since Peter is the only person providing clear images of Spider-Man.

Norman, upon learning Oscorp's board members plan to sell the company, assassinates them at the World Unity Fair. Jameson quickly dubs the mysterious killer the Green Goblin. The Goblin offers Spider-Man a place at his side, but Spider-Man refuses. At the Osborn and Parkers' Thanksgiving dinner, Norman, unknown to Peter, deduces Spider-Man's true identity; the Green Goblin subsequently attacks and hospitalizes Aunt May.

Mary Jane admits she has a crush on Spider-Man, who has rescued her on numerous occasions, and she asks Peter whether Spider-Man ever asked about her anf after he saves her from some crooks he pulls her on to the roof where slowly removes his costume and her own wet clothing until only the mask remains and she pulls it just above the mouth and they make out. Harry, who loves Mary Jane, arrives and learns she does not feel likewise toward him. Devastated, Harry tells his father that Peter loves Mary Jane, unintentionally revealing Spider-Man's biggest weakness.

Norman begs for forgiveness, but his Goblin persona attempts to remote-control his glider to impale Spider-Man. The superhero avoids the attack, causing the glider to impale Norman instead, finally killing him. In his dying breath, Norman tells Peter not to tell Harry about his crimes. Spider-Man takes Norman's body back to Osborn's house and hides the Green Goblin's equipment. At Norman’s funeral, Harry swears vengeance toward Spider-Man, believing him responsible for killing his father, and asserts that Peter is all he has left. Mary Jane confesses to Peter she is in love with him, but Peter, feeling that he must protect her from the unwanted attentions of Spider-Man's enemies, hides his true feelings and tells her that they can only be friends. As Peter leaves the funeral, he recalls Ben's words about responsibility, and accepts his new life as Spider-Man.

The studio had expressed interest in actors Leonardo DiCaprio, Edward Furlong and Freddie Prinze, Jr, Chris Klein, Wes Bentley, and Heath Ledger. Edward Furlong had been considered by James Cameron for the role in 1996, while Raimi joked of Prinze that "[he] won't even be allowed to buy a ticket to see this film." In addition, actors Scott Speedman, Jay Rodan, and James Franco were involved in screen tests for the lead role.

Bruce Campbell, a long-time colleague of director Sam Raimi, has a cameo as the announcer at the wrestling ring Peter takes part in. Ted Raimi, Sam Raimi's actor brother, plays a small role as editor's assistant "Hoffman". Sam Raimi himself appeared off-screen, throwing popcorn at Peter as he enters the arena to wrestle Bonesaw McGraw (played by former professional wrestler "Macho Man" Randy Savage). Spider-Man co-creator Stan Lee also has a cameo, in which he asks Peter, "Hey kid, would you like a pair of these glasses? They're the kind they wore in X-Men." The scene was cut, and Lee only briefly appears in the film to grab a young girl from falling debris during the battle between Spider-Man and the Green Goblin in Times Square. R&B/soul singer Macy Gray appears as herself. Lucy Lawless, star of Xena: Warrior Princess (produced by Raimi), also appears as a punk rock girl. One of the stunt performers in the film is actor Johnny Tri Nguyen. Octavia Spencer has a brief appearance as the check-in girl who signs Peter Parker into the wrestling match and warns him that they are not liable for the injuries he will sustain. 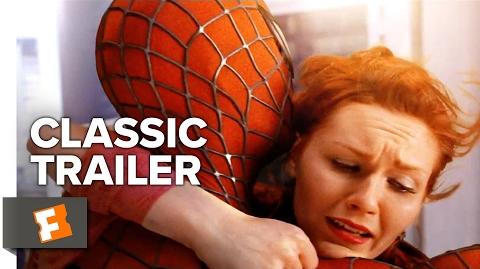