Moviepedia
Register
Don't have an account?
Sign In
Advertisement
in: Films based on novels, 2004 films, Film articles without a specified rating,
and 14 more

Spider-Man 3
Not to be confused with Spider-Man: Far From Home, which is the second MCU Spider-Man film.

Spider-Man 2 is the second film in the Spider-Man series of films directed by Sam Raimi. It stars Tobey Macguire as the masked hero, and also stars Kirsten Dunst, Alfred Molina, James Franco, and Rosemary Harris. The film was released on June 30, 2004 by Columbia Pictures.

This time, the stress of being Spider-Man, attending college, and working two jobs as a delivery boy and a photographer for the Daily Bugle begins to eat at Peter, and after his powers decide to "glitch", he decides he is Spider-Man no more. In a sick turn of events, Peter's idol, Doctor Otto Octavius's lab experiment, funded by OsCorp., goes haywire, and turns him into the evil Doc Ock. Now, Peter must stop him before he destroys the city, or worse, even the world.

Actress Peyton List had an uncredited role in the film. 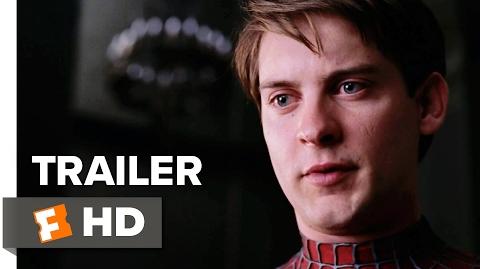