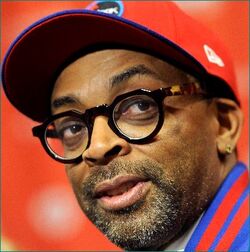 Shelton Jackson "Spike" Lee (born March 20, 1957) is an film director, producer, writer and actor. His production company, 40 Acres and a Mule Filmworks, has produced over 35 films since 1983.

Lee's films have examined race relations, colorism in the black community, the role of media in contemporary life, urban crime and poverty, and other political issues. He has won numerous accolades for his work, including two Academy Award nominations, a Student Academy Award, and an Academy Honorary Award from the Academy of Motion Picture Arts and Sciences, two Emmy Awards, two Peabody Awards, an honorary BAFTA Award, an Honorary César, the 2013 Gish Prize, and a Grand Prix award.

Lee was born in Atlanta, Georgia, the son of Jacqueline Carroll (née Shelton), a teacher of arts and black literature, and William James Edward Lee III, a jazz musician and composer. Lee also had three younger siblings Joie, David, and Cinqué, who all worked in many different positions in Lee's films. Director Malcolm D. Lee is his cousin. When he was a child, the family moved to Brooklyn, New York. His mother nicknamed him "Spike" during his childhood. He attended John Dewey High School in Brooklyn's Gravesend neighborhood.

Lee enrolled in Morehouse College, a historically black college, where he made his first student film, Last Hustle in Brooklyn. He took film courses at Clark Atlanta University and graduated with a B.A. in mass communication from Morehouse. He did graduate work at New York University's Tisch School of the Arts, where he earned a Master of Fine Arts in film & television.

In 1991, Lee taught a course at Harvard about filmmaking and in 1993 he began to teach at New York University’s Tisch School of the Arts in the Graduate Film Program. It was there that he received his Master of Fine Arts and was appointed Artistic Director in 2002.

In 1985, Lee began work on his first feature film, She's Gotta Have It. With a budget of $175,000, he shot the film in two weeks. When the film was released in 1986, it grossed over $7,000,000 at the U.S. box office. Lee's 1989 film Do the Right Thing was nominated for an Academy Award for Best Original Screenplay in 1989. Many people, including Hollywood's Kim Basinger, believed that Do the Right Thing also deserved a Best Picture nomination. Driving Miss Daisy won Best Picture that year. Lee said in an April 7, 2006 interview with New York magazine that the other film's success, which he thought was based on safe stereotypes, hurt him more than if his film had not been nominated for an award.

After the 1990 release of Mo' Better Blues, Lee was accused of antisemitism by the Anti-Defamation League and several film critics. They criticized the characters of the club owners Josh and Moe Flatbush, described as "Shylocks". Lee denied the charge, explaining that he wrote those characters in order to depict how black artists struggled against exploitation. Lee said that Lew Wasserman, Sidney Sheinberg or Tom Pollock, the Jewish heads of MCA and Universal Studios, were unlikely to allow antisemitic content in a film they produced. He said he could not make an antisemitic film because Jews run Hollywood, and "that's a fact".

His 1997 documentary 4 Little Girls, about the children killed in the 16th Street Baptist Church bombing in Birmingham, Alabama in 1963, was nominated for the Academy Award for Best Feature Documentary.

On May 2, 2007, the 50th San Francisco International Film Festival honored Spike Lee with the San Francisco Film Society's Directing Award. In 2008, he received the Wexner Prize.[10] In 2013, he won The Dorothy and Lillian Gish Prize, one of the richest prizes in the American arts worth $300,000.[11] In 2015, Lee received an Academy Honorary Award from the Academy of Motion Picture Arts and Sciences for his contributions to film.

In mid-1990, Levi's began producing a series of TV commercials directed by Lee for their 501 button fly jeans.

Marketing executives from Nike offered Lee a job directing commercials for the company. They wanted to pair Lee's character, the Michael Jordan–loving Mars Blackmon, and Jordan in a marketing campaign for the Air Jordan line. Later, Lee was called on to comment on the controversy surrounding the inner-city rash of violence involving youths trying to steal Air Jordans from other kids. He said that, rather than blaming manufacturers of apparel that gained popularity, "deal with the conditions that make a kid put so much importance on a pair of sneakers, a jacket and gold".

Through the marketing wing of 40 Acres and a Mule, Lee has directed commercials for Converse, Jaguar, Taco Bell, and Ben & Jerry's.

Lee's films have examined race relations, colorism in the black community, the role of media in contemporary life, urban crime and poverty, and other political issues. His films are also noted for their unique stylistic elements, including the use of dolly shots to portray the characters "floating" through their surroundings, which has been used numerous times across Lee's filmography.

Lee's films are typically referred to as "Spike Lee Joints" and the closing credits always end with the phrases "By Any Means Necessary", "Ya Dig", and "Sho Nuff". However, his 2013 film, Oldboy, used the traditional "A Spike Lee Film" credit after producers heavily re-edited it.

In June 2003, Lee sought an injunction against Spike TV to prevent them from using his nickname. Lee claimed that because of his fame, viewers would think he was associated with the new channel.

When asked by the BBC if he believed in God, Lee said: "Yes. I have faith that there is a higher being. All this cannot be an accident."

While Lee continues to maintain an office in Fort Greene, Brooklyn, he and his wife live on the Upper East Side of Manhattan.

In May 1999, the New York Post reported that Lee made an inflammatory comment about Charlton Heston, president of the National Rifle Association, while speaking to reporters at the Cannes Film Festival. Lee was quoted as saying the National Rifle Association should be disbanded and, of Heston, someone should "Shoot him with a .44 Bull Dog." Lee said he intended it as a joke. He was responding to coverage about whether Hollywood was responsible for school shootings. "The problem is guns," he said. Republican House Majority Leader Dick Armey condemned Lee as having "nothing to offer the debate on school violence except more violence and more hate."

In October 2005, Lee responded to a CNN anchor's question as to whether the government intentionally ignored the plight of black Americans during the 2005 Hurricane Katrina catastrophe by saying, "It's not too far-fetched. I don't put anything past the United States government. I don't find it too far-fetched that they tried to displace all the black people out of New Orleans." In later comments, Lee cited the government's past including the Tuskegee Study of Untreated Syphilis in the Negro Male.

At the 2008 Cannes Film Festival, Lee, who was then making Miracle at St. Anna, about an all-black U.S. division fighting in Italy during World War II, criticized director Clint Eastwood for not depicting black Marines in his own World War II film, Flags of Our Fathers. Citing historical accuracy, Eastwood responded that his film was specifically about the Marines who raised the flag on Mount Suribachi at Iwo Jima, pointing out that while black Marines did fight at Iwo Jima, the U.S. military was racially segregated during World War II, and none of the men who raised the flag were black. He angrily said that Lee should "shut his face". Lee responded that Eastwood was acting like an "angry old man", and argued that despite making two Iwo Jima films back to back, Letters from Iwo Jima and Flags of Our Fathers, "there was not one black soldier in both of those films". He added that he and Eastwood were "not on a plantation." Lee later claimed that the event was exaggerated by the media and that he and Eastwood had reconciled through mutual friend Steven Spielberg, culminating in his sending Eastwood a print of Miracle at St. Anna.

In March 2012, after the shooting of Trayvon Martin, Spike Lee was one of many people who used Twitter to circulate a message which claimed to give the home address of the shooter George Zimmerman. The address turned out to be incorrect, causing the real occupants, Elaine and David McClain, to leave home and stay at a hotel due to numerous death threats.[44] Lee issued an apology and reached an agreement with the McClains which reportedly included "compensation", with their attorney stating "The McClains’ claim is fully resolved". Nevertheless, in November 2013, the McClains filed a negligence lawsuit which accused Lee of "encouraging a dangerous mob mentality among his Twitter followers, as well as the public-at-large". The lawsuit, which a court filing reportedly valued at $1.2 million, alleged that the couple suffered "injuries and damages" that continued after the initial settlement up through Zimmerman's trial in 2013. A Seminole County judge dismissed the McClains' suit, agreeing with Lee that the issue had already been settled previously.

In 1983, Lee won the Student Academy Award for his film Joe's Bed-Stuy Barbershop: We Cut Heads. He won awards at the Black Reel Awards for Love and Basketball,the Black Movie Awards for Inside Man, and the Berlin International Film Festival for Get on the Bus.

He has been nominated twice for an Academy Award, but hasn't won; in November 2015, he was given the Academy Honorary Award for his contributions to film-making.

Two of his films have competed for the Palme d'Or award at the Cannes Film Festival with BlacKkKlansman winning the Grand Prix in 2018.