Spirit: Stallion of the Cimarron

Spirit: Stallion of the Cimarron

(Australia)
Spirit: Stallion of the Cimarron is a 2002 American animated western drama film that was produced by DreamWorks Animation and released by DreamWorks Pictures. It follows the adventures of a young Kiger Mustang stallion living in the 19th century wild west. The film, written by John Fusco and directed by Kelly Asbury and Lorna Cook, was nominated for the Academy Award for Best Animated Feature]. In contrast to the way animals are portrayed in an anthropomorphic style in other animated features, Spirit and his fellow horses communicate with each other through sounds and body language. Spirit's thoughts are narrated by his voice actor Matt Damon, but otherwise he has no dialogue.

In the 19th-century American West, a young Kiger Mustang colt, Spirit, is born to a herd of horses. Spirit soon grows into a stallion and assumes the role of leader of the herd, whose duty is to keep the herd safe. Spirit is a courageous leader but has great curiosity. Spotting a strange light one night not far from his herd, the stallion is intrigued and investigates. He finds restrained, docile horses and their human wranglers sleeping around a campfire. They wake up, and seeing him as a magnificent specimen, chase and capture him, taking him to a US cavalry post.

At this time, the army is fighting the Indian Wars and taking over the soon-to-be western United States. Frightened and confused, Spirit sees horses used as 'slaves' all around him. There, he encounters "The Colonel", who decides to have the mustang tamed, refusing to believe the idea of Spirit being too stubborn, but Spirit manages to fight off all attempts to tame him. To weaken Spirit, The Colonel orders him tied to a post for three days with no food or water. Meanwhile, a Lakota Native American named Little Creek is also brought into the fort and held captive. Spirit is later supposedly broken in by the Colonel, who speaks his idea of how any wild horse can be tamed. However, Spirit gets a second wind and finally throws him off. The Colonel gets frustrated and tries to shoot him, but Little Creek (who frees himself from his bounds with a knife) saves Spirit from being shot. The two of them, along with other horses, escape the post. Little Creek's mare, Rain, meets them along with other natives who capture Spirit.

After returning to the Lakota village, Little Creek tries to tame Spirit with kindness, but Spirit refuses to be ridden. Little Creek ties Spirit and Rain together and, when he tries to leave, she insists on staying, then shows him her world. Spirit begins to warm up to Little Creek and falls in love with the mare. At the end of their time together, Little Creek tries again to ride him, but Spirit is still unwilling. He then decides that Spirit will never be tamed and frees him. As Spirit asks Rain to come with him to his herd, a cavalry regiment led by the Colonel attacks the village. During the vicious battle, the Colonel tries to shoot Little Creek, but Spirit runs into the Colonel and his horse, deflecting the shot and saving Little Creek's life. However, Rain is shot by the Colonel, knocking her into the river. Spirit dives into the river to try to rescue Rain but is unsuccessful and they both plummet over a waterfall. Spirit finds Rain dying from her injuries and stays by her side until the army captures him. Watching Spirit being pulled away, Little Creek arrives, vowing to free him to satisfy his life-debt and follows the men after tending to Rain.

Spirit is loaded onto a train and taken to a work site on the Transcontinental Railroad, where he is put to work pulling a steam locomotive. Realizing that the track will infringe on his homeland, Spirit breaks free from the sledge and breaks the chains holding the other horses. They escape, and the locomotive falls off its sledge and rolls down the hill back to the work site, causing an explosion. Little Creek appears in time and saves Spirit from the ensuing wildfire.

The next morning, the Colonel and his men find Spirit and Little Creek, and a chase ensues through the Grand Canyon. Eventually, they are trapped by a gorge. Little Creek gives up, but Spirit manages to successfully leap across the canyon. Spirit's move amazes the Colonel; he humbly gives up, stops his men from shooting the two, and allows Spirit and Little Creek to leave. Spirit returns to the rebuilt Lakota village with Little Creek and finds Rain nursed back to health. Little Creek decides to name Spirit the "Spirit-Who-Could-Not-Be-Broken" and sets him and Rain free. The two horses return to Spirit's homeland, eventually reuniting with Spirit's herd. 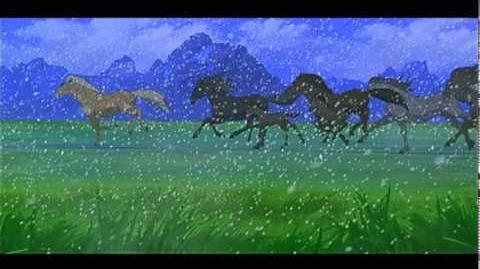