Moviepedia
Register
Don't have an account?
Sign In
Advertisement
in: Film production companies of the United States

Spyglass Entertainment is an American film and television production company, Co-founded by Gary Barber and Roger Birnbaum in 1999, where they serve as Co-CEOs. It is currently owned by Cerberus Capital Management. Jonathan Glickman serves the current President of Production. Internationally, Warner Bros has released most films made by Spyglass (with exceptions). Spyglass Entertainment's logo is a man standing in front of an ocean scene looking through a spyglass. The company was previously known as Pathe Pictures

Jeffrey Chernov was once a production executive at Spyglass Entertainment. 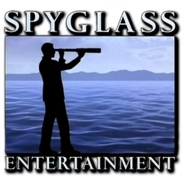