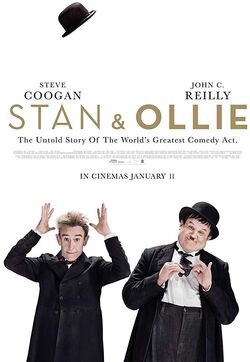 Stan & Ollie is a 2018 biographical film directed by Jon S. Baird and written by Jeff Pope. Based on the later years of the lives of the comedy double act Laurel and Hardy, the film stars Steve Coogan and John C. Reilly as Stan Laurel and Oliver Hardy. It premiered in October 2018 at the BFI London Film Festival. The film was released in the United States on 28 December 2018 and was released in the United Kingdom on 11 January 2019.

At the 76th Golden Globe Awards, Reilly was nominated for Best Actor – Motion Picture Musical or Comedy, and at the 72nd British Academy Film Awards the film earned three nominations, including Best British Film and Best Actor in a Leading Role for Coogan.

In 1937, while making Way Out West Stan Laurel refuses to renew his contract with Hal Roach because Stan believes the studio and Roach himself are failing to financially recognize the global fame the pair enjoyed at that time. Oliver Hardy however remains tied to Roach on a different contract and isn't let go, with the studio attempting to pair him up with Harry Langdon in the film Zenobia, and while Laurel and Hardy would soon get back together Ollie's absence during a meeting with Fox results in them not being signed on by the studio, leaving Stan feeling betrayed and bitter for years.

In 1953, the comedy duo embark on a grueling music hall tour of the United Kingdom and Ireland while struggling to get another film made: a comedic adaptation of Robin Hood. However poor pre-publicity in Britain managed by the producer Bernard Delfont means the tour begins in almost empty back street theaters with Delfont seeming more interested in his up and coming star Norman Wisdom. Belatedly, Delfont organises some public appearances and word of their visit to Britain spreads, resulting in them filling much larger prestigious venues.

During the tour the pair, driven by Stan, continue to write and develop gags for the film. There is, however, an ominous silence from its London-based producer. Once the tour arrives in London, Stan pays a visit to the film's producer himself and discovers there is insufficient funding and the project has been cancelled. He can't bring himself to tell Ollie and their script development continues.

They are soon joined by their respective wives, Ida and Lucille, at London's Savoy Hotel before they are to perform at a sold out two-week residency at the nearby Lyceum Theatre. After the opening night at the Lyceum, a party is held to honour them, tensions beginning to show between the two wives leading Delfont to remark that he's got two double acts for the price of one. As the night progresses however Stan's feelings of Ollie's betrayal come to the surface after his wife brings up the "elephant movie", resulting in the two having a public argument over the movie contract fiasco that split them up, Stan claims they wouldn't have to do the tour had Ollie been there for the Fox meeting, with Ollie claiming they weren't really friends, and that not only were they friends because they were paired up by Hal Roach but that Stan didn't love him as a friend but only loved Laurel and Hardy. With the wives having a spat between them Ollie leaves the party with his wife, leaving Stan alone.

Despite their friendship having taken a blow, they press on with their public appearances which includes judging a beauty contest in the seaside resort of Worthing, Ollie refusing to speak to Stan despite the latter's attempts. However, just when they are about to announce the winner, Ollie collapses from a heart attack and is forced into bed rest. When informing Delfont two days later that it's unlikely Ollie will get better in time to continue the tour Delfont suggests having another well known English comic step in Ollie's place.When visiting Ollie in his room Stan is told by Ollie that he intends to retire immediately, explaining that a doctor had warned him that he must never go onstage again as the strain could be fatal, he and his wife will be leaving for America as soon as possible. Getting into bed with him to warm Ollie up Stan asks if Ollie meant what he said at the party, Ollie admitting he didn't, and when asked the same by Ollie Stan admits he didn't mean what he had said as well, the two sharing a silent moment together.

On the night of the next show Stan finds it impossible to work with the English comic that Delfont has set up for him as a substitute so that the tour can continue, simply because he isn't Ollie, and as such the performance is canceled much to Delfont's dismay. Once his wife finds him at the bar Stan confesses to her that he truly does love Ollie as a friend, and intends to return to America instead of continuing the tour, though asks to make sure Ollie doesn't know he's leaving. Ollie in turn decides he can't spend the rest of his life idle in bed and leaves his hotel room just before his wife comes back. As they pack Stan's wife hears a knock on the door, when he answers it Stan is surprised to see Ollie, having a feeling Stan was leaving. The two finally recognise the real fondness that exists between them and what pleasure they get from each other, and as they silently forgive each other Ollie smiles and tells Stan they have a show to do, making Stan smile right back at his friend, and despite struggling during the night Ollie successfully performs on stage with Stan to a thunderous applause from the audience. While sailing to Ireland to continue the tour Stan finally confesses he has deceived Ollie about the prospects of the future film even while they continued to work on it, Stan believes maybe no one wants to see a Laurel and Hardy movie anymore. Ollie confesses in turn that he had read that from Stan's demeanor and already knew, confusing Stan greatly as he asks why they had kept working on the script if Ollie had known the truth all along, Ollie confessing that's all they could do. Upon arriving in Ireland the duo are welcomed by a large crowd of fans, both young and old, and they continue to complete the tour to great acclaim from their fans despite Ollie's poor health.

As the film ends it is revealed in a written epilogue that the tour was the last time they ever worked together, Ollie's health didn't improve and deteriorated after the tour, leading to his death in 1957 and Stan, devastated by his friend's death, refused to work without his partner and effectively retired until his death eight years later in 1965. Stan continued to write sketches for Laurel and Hardy in the last eight years of his life.

Steve Coogan and John C. Reilly were announced to be playing the duo in January 2016 in a biopic to be directed by Jon S. Baird. The film was written by Jeff Pope, who had previously collaborated with Coogan on the Oscar-nominated screenplay for Philomena. Pope described the comedy duo as being his "heroes".

Principal UK photography began in spring 2017. It took place in Dudley, in the West Midlands of England, as well as Birmingham at The Old Rep theatre, West London Film Studios and Bristol in South West England.

Whilst Entertainment One Films will handle distribution in the United Kingdom, Canada, Australia, New Zealand, Spain and the Benelux, Sony Pictures Classics were given the right to distribute the film in the United States, Latin America, Eastern Europe, China and South Africa.

Following Stan & Ollie's October 2018 debut at the BFI London Film Festival, the film received positive reviews from critics. On review aggregator Rotten Tomatoes, the film holds an approval rating of 91% based on 65 reviews, with an average rating of 7.5/10. The website's critical consensus reads, "Stan & Ollie pays tribute to a pair of beloved entertainers with an affectionate look behind the scenes -- and a moving look at the burdens and blessings of a creative bond." On Metacritic, the film has a weighted average score of 71 out of 100, based on 15 critics, indicating "generally favorable reviews".

Guy Lodge of Variety wrote: "Portraying Laurel and Hardy's final comic collaboration with bittersweet affection, Jon S. Baird's film is a laid-back, gamely performed tribute." Todd McCarthy of The Hollywood Reporter had high praise for the lead actors saying: "Much of the time, you feel like you're beholding the real duo, so thoroughly conceived are the actors' physicality and performances." He concluded: "Everything the film has to offer is obvious and on the surface, its pleasures simple and sincere under the attentive guidance of director Jon S. Baird." Alex Hudson of Exclaim! gave the film 7/10, writing: "It's all fairly predictable stuff, but it's very sweet nonetheless — especially thanks to fantastic performances from Reilly and Coogan."

Retrieved from "https://movies.fandom.com/wiki/Stan_%26_Ollie?oldid=162940"
Community content is available under CC-BY-SA unless otherwise noted.