watch 03:27
Wiki Targeted (Entertainment)
Do you like this video?
Play Sound
Star Trek: The Motion Picture 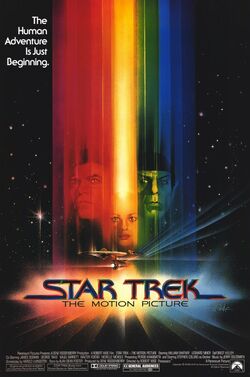 Star Trek: The Motion Picture is a 1979 American science fiction film released by Paramount Pictures. It is the first film based on Star Trek, and a sequel to the Star Trek television series. The film is set in the twenty-third century, when a mysterious and immensely powerful alien cloud called V'Ger approaches Earth, destroying everything in its path. Admiral James T. Kirk (William Shatner) assumes command of his previous starship—the recently refitted USS Enterprise—to lead it on a mission to save the planet and determine V'Ger's origins.

When the original television series was cancelled in 1969, Star Trek creator Gene Roddenberry lobbied Paramount to continue the franchise through a film. The success of the series in syndication convinced the studio to begin work on a feature film in 1975. A series of writers attempted to craft a suitably epic script, but the attempts did not satisfy Paramount, so the studio scrapped the project in 1977. Paramount instead planned on returning the franchise to its roots with a new television series, Star Trek: Phase II. The box office success of Close Encounters of the Third Kind convinced Paramount that science fiction films other than Star Wars could do well at the box office, so the studio cancelled production of Phase II and resumed its attempts at making a Star Trek film. In 1978, Paramount assembled the largest press conference held at the studio since the 1950s to announce that double Academy Award–winning director Robert Wise would helm a $15 million film adaptation of the television series.

With the cancellation of Phase II, writers rushed to adapt its planned pilot episode, "In Thy Image," into a film script. Constant revisions to the story and shooting script continued, to the extent of hourly script updates on shooting dates. The Enterprise was modified inside and out; costume designer Robert Fletcher provided new uniforms and production designer Harold Michelson fabricated new sets. Jerry Goldsmith composed the score, beginning an association with Star Trek that would continue until 2002. When the original contractors for the optical effects proved unable to complete their tasks in time, effects supervisor Douglas Trumbull was given carte blanche to meet the December 1979 release date. The film came together only days before the premiere; Wise took the just-completed film to its Washington, D.C., opening, but always felt that the theatrical version was a rough cut of the film he wanted to make.

Released in North America on December 7, 1979, Star Trek: The Motion Picture received mixed reviews from critics, many of whom faulted the film for its lack of action and over-reliance on special effects. The final production cost ballooned to approximately $46 million. The film earned $139 million worldwide, falling short of studio expectations but enough for Paramount to propose a cheaper sequel. Roddenberry was forced out of creative control for Star Trek II: The Wrath of Khan. In 2001, Wise oversaw a director's cut for a special DVD release of the film, with remastered audio, tightened and added scenes, and new computer-generated effects.

A Starfleet monitoring station, Epsilon Nine, detects an alien force, hidden in a massive cloud of energy, moving through space towards Earth. The cloud destroys three of the Klingons' new K't'inga-class warships and the monitoring station en route. On Earth, the starship Enterprise is undergoing a major refit; her former Captain, James T. Kirk, has been promoted to Admiral and works in San Francisco as Chief of Starfleet Operations. Starfleet dispatches Enterprise to investigate the cloud entity as the ship is the only one in intercept range, requiring her new systems to be tested in transit.

Kirk takes command of the ship citing his experience, angering Captain Willard Decker, who had been overseeing the refit as its new commanding officer. Testing of Enterprise's new systems goes poorly; two officers, including the science officer, are killed by a malfunctioning transporter, and improperly calibrated engines almost destroy the ship. The tension between Kirk and Decker increases when the admiral demonstrates his unfamiliarity with Enterprise. Spock arrives as replacement science officer, explaining that while on his home world undergoing a ritual to purge all emotion, he felt a consciousness that he believes emanates from the cloud.

The Enterprise intercepts the energy cloud and is attacked by an alien vessel within. A probe appears on the bridge, attacks Spock and abducts the navigator, Ilia. She is replaced by a robotic doppelgänger, a probe sent by "V'Ger" to study the crew. Decker is distraught over the loss of Ilia, with whom he had a romantic history. He becomes troubled as he attempts to extract information from the doppelgänger, which has Ilia's memories and feelings buried within. Spock takes a spacewalk to the alien vessel's surface and attempts a telepathic mind meld with it. In doing so, he learns that the vessel is V'Ger itself, a living machine.

At the heart of the massive ship, V'Ger is revealed to be Voyager 6, a 20th-century Earth space probe believed lost. The damaged probe was found by an alien race of living machines that interpreted its programming as instructions to learn all that can be learned, and return that information to its creator. The machines upgraded the probe to fulfill its mission, and on its journey the probe gathered so much knowledge that it achieved consciousness. Spock realizes that V'Ger lacks the ability to give itself a focus other than its original mission; having learned what it could on its journey home, it finds its existence empty and without purpose. Before transmitting all its information, V'Ger insists that the Creator come in person to finish the sequence. Realizing that the machine wants to merge with its creator, Decker offers himself to V'Ger; he merges with the Ilia probe and V'Ger, creating a new form of life that disappears into another dimension. With Earth saved, Kirk directs Enterprise out to space for future missions.

Retrieved from "https://movies.fandom.com/wiki/Star_Trek:_The_Motion_Picture?oldid=128410"
Community content is available under CC-BY-SA unless otherwise noted.