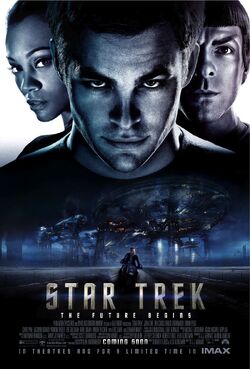 In the 23rd century, the Federation starship USS Kelvin is investigating a "lightning storm" in space. A Romulan ship, the Narada, emerges from the storm and attacks the Kelvin. Narada‍ '​s first officer, Ayel, demands that the Kelvin‍ '​s Captain Robau come aboard to negotiate a truce. Once aboard, Robau is questioned about the current stardate and an "Ambassador Spock", whom he professes not to know. Narada‍ '​s commander, Nero, kills him, and continues his attack on the Kelvin. George Kirk, the Kelvin‍ '​s first officer, orders the ship's personnel, including his pregnant wife Winona, to evacuate the ship while he pilots the Kelvin on a collision course with the Narada, as the auto-pilot function has been damaged. At the cost of his life, Kirk ensures Winona's survival as she gives birth to James T. Kirk.

17 years later, on the planet Vulcan, a young Spock is accepted to join the Vulcan Science Academy. Realizing that the Academy views his human mother Amanda Grayson as a "disadvantage", he decides to join Starfleet instead. On Earth, Kirk becomes a reckless but intelligent young adult. By 2255, after a bar fight with Starfleet cadets accompanying Nyota Uhura, Kirk meets Captain Christopher Pike who encourages him to enlist in the Starfleet Academy where Kirk meets and befriends the cynical doctor Leonard McCoy.

Three years later, Commander Spock accuses Kirk of cheating during his Kobayashi Maru simulation. Kirk argues that cheating was acceptable in this context because the simulation had been designed to be unbeatable. The disciplinary hearing is interrupted by a distress signal from Vulcan. With the primary fleet out of range, the cadets are mobilized. McCoy and Kirk board Pike's ship, the Enterprise. Realizing that the "lightning storm" being observed on Vulcan is similar to the one that occurred at the time of his birth, Kirk breaks protocol to convince Pike that the distress signal is a trap.

Enterprise arrives at Vulcan to find the fleet destroyed and the Narada drilling into Vulcan's core. The Narada attacks the Enterprise and Pike surrenders, delegating command of the ship to Spock and promoting Kirk to first officer. Kirk, Hikaru Sulu and Chief Engineer Olson perform a space jump onto the drilling platform. Olson is killed but Kirk and Sulu disable the drill. Despite their efforts, Nero launches "red matter" into the core, forming an artificial black hole that destroys the planet. Spock rescues the Vulcan high council and his father Sarek, though his mother dies by falling when they were trying to beam them all onto the ship.

As the Narada moves toward Earth, Nero tortures Pike to gain access to Earth's defense codes. Spock maroons Kirk on Delta Vega after attempting mutiny. Kirk encounters an older Spock, who explains that he and Nero are from 129 years in the future. In that future, Romulus was threatened by a supernova. Spock's attempt to use "red matter" to create an artificial black hole and consume the supernova was too late, and Nero's family perished along with the planet. Narada and Spock's vessel were caught in the black hole, sending them back in time. Nero stranded Spock on Delta Vega to watch Vulcan's destruction as revenge for failing to save Romulus.

Reaching a Starfleet outpost, Kirk and the elder Spock meet Montgomery Scott "Scottie". With the elder Spock's help, Kirk and Scott beam onto the Enterprise. Following the elder Spock's advice, Kirk provokes younger Spock into attacking him, forcing Spock to recognize that he is emotionally compromised and relinquish command to Kirk. After talking with Sarek, Spock decides to help Kirk. While the Enterprise hides itself within the gas clouds of Titan, Kirk and Spock beam aboard the Narada. Kirk fights with Nero and Ayel, killing the latter and rescuing Pike while Spock uses the elder Spock's ship to destroy the drill. Spock leads the Narada away from Earth and sets his ship to collide with Nero's ship. Enterprise arrives and beams Kirk, Pike, and Spock aboard. The older Spock's ship and the Narada collide, igniting the "red matter". Kirk offers Nero help to escape, but Nero refuses, prompting Kirk to give the order to fire, dooming Nero and the Narada to be consumed in a black hole.

On Earth, Kirk is promoted to the rank of Captain and given command of the Enterprise while Pike is promoted to Rear Admiral. Spock encounters his older self. Having selected a planet for the surviving Vulcans to colonize, the older Spock persuades his younger self to continue serving in Starfleet, encouraging him to do what feels right instead of what is logical. Spock remains in Starfleet and becomes first officer under Kirk's command. The Enterprise goes to warp as the elder Spock speaks the "where no one has gone before" monologue in voice-over.

As early as the 1968 World Science Fiction Convention, Star Trek creator Roddenberry had said he was going to make a film prequel to the television series. But the prequel concept did not resurface until the late 1980s, when Ralph Winter and Harve Bennett submitted a proposal for a prequel during development of the fourth film. Roddenberry rejected Bennett's prequel proposal in 1991, after the completion of Star Trek V: The Final Frontier. Then David Loughery wrote a script entitled The Academy Years, but it was shelved in light of objections from Roddenberry and the fanbase. The film that was commissioned instead ended up being Star Trek VI: The Undiscovered Country. In February 2005, after the financial failure of the tenth film, Star Trek: Nemesis (2002), and the cancellation of the television series Star Trek: Enterprise, the franchise's executive producer Rick Berman and screenwriter Erik Jendresen began developing a new film entitled Star Trek: The Beginning. It was to revolve around a new set of characters, led by Kirk's ancestor Tiberius Chase, and be set during the Earth-Romulan War—after the events of Enterprise but before the events of the original series.

In 2005, Viacom, which owned Paramount Pictures, separated from CBS Corporation, which retained Paramount's television properties, including ownership of the Star Trek brand. Gail Berman, then president of Paramount, convinced CBS' chief executive, Leslie Moonves, to allow them eighteen months to develop a new Star Trek film before CBS would re-earn the rights to develop a new television series (in return, CBS would keep merchandising rights). Berman approached Mission: Impossible III writers Orci and Kurtzman for ideas on the new film, and after the film had completed shooting she asked their director, Abrams, to produce it.Abrams, Orci and Kurtzman, plus producers Damon Lindelof and Bryan Burk, felt the franchise had explored enough of what took place after the series, Orci and Lindelof consider themselves trekkies, and feel some of the Star Trek novels have canonical value, although Roddenberry never considered the novels to be canon. Kurtzman is a casual fan, while Burk was not. Abrams' company, Bad Robot Productions produced the film with Paramount, marking the first time another company had financed a Star Trek film. Bill Todman, Jr.'s Level 1 Entertainment also co-produced the film, but, during 2008, Spyglass Entertainment replaced them as financial partner.

In an interview, Abrams said that he had never seen Star Trek: Nemesis because he felt the franchise had "disconnected" from the original series. For him, he said, Star Trek was about Kirk and Spock, and the other series were like "separate space adventure[s] with the name Star Trek". He also acknowledged that as a child he had actually preferred the Star Wars movies. He noted that his general knowledge of Star Trek made him well suited to introduce the franchise to newcomers, and that, being an optimistic person, he would make Star Trek an optimistic film, which would be a refreshing contrast to the likes of The Dark Knight. He added that he loved the focus on exploration in Star Trek and the idea of the Prime Directive, which forbids Starfleet to interfere in the development of primitive worlds, but that, because of the budgetary limitations of the original series, it had "never had the resources to actually show the adventure". He noted he only became involved with the project as producer initially because he wanted to help Orci, Kurtzman and Lindelof.

On February 23, 2007, Abrams accepted Paramount's offer to direct the film, after having initially been attached to it solely as a producer. He explained that he had decided to direct the film because, after reading the script, he realized that he "would be so agonizingly envious of whoever stepped in and directed the movie." Orci and Kurtzman said that their aim had been to impress a casual fan like Abrams with their story. Abrams noted that, during filming, he had been nervous "with all these tattooed faces and pointy ears, bizarre weaponry and Romulan linguists, with dialogue about 'Neutral Zones' and 'Starfleet' [but] I knew this would work, because the script Alex and Bob wrote was so emotional and so relatable. I didn't love Kirk and Spock when I began this journey – but I love them now."

Retrieved from "https://movies.fandom.com/wiki/Star_Trek_(2009)?oldid=182750"
Community content is available under CC-BY-SA unless otherwise noted.