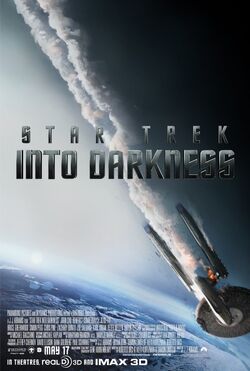 Star Trek into Darkness is a 2013 American science fiction action film directed by J. J. Abrams, written by Roberto Orci, Alex Kurtzman and Damon Lindelof, and produced by Abrams, Bryan Burk, Lindelof, Kurtzman and Orci. It is the twelvth Star Trek film and serves as the sequel to 2009's Star Trek.

Most of the crew of the first film returned, including director and producer Abrams and his most regular collaborators: composer Michael Giacchino, cinematographer Daniel Mindel, and editors Maryann Brandon and Mary Jo Markey. Kurtzman and Orci are returning as screenwriters (and now also producers), while Lindelof returns as producer and now also acts as co-writer. Chris Pine, Zachary Quinto, Karl Urban, Zoe Saldana, Anton Yelchin, Simon Pegg, John Cho and Bruce Greenwood returned to reprise their roles from the previous film, with the addition of Alice Eve as Dr. Carol Marcus and Benedict Cumberbatch as John Harrison, the villain. The film released on May 17, 2013

The USS Enterprise has been sent to the planet Nibiru to study the development of primitive cultures. Captain James T. Kirk (Chris Pine) and Spock (Zachary Quinto) attempt to save the planet's inhabitants from a volcanic eruption. When Spock's life is endangered Kirk violates the Prime Directive, exposing the Enterprise to the planet's civilization during his rescue.

After being summoned back to Earth Kirk loses command of the Enterprise, and Admiral Christopher Pike (Bruce Greenwood) is reinstated as its commanding officer. Pike, feeling that Kirk deserves a second chance, enables Kirk's assignment as first officer.

When a secret Section 31 installation in London is bombed, Pike, Kirk and Spock meet with Starfleet commanders to discuss the hunt for the bomber—rogue Starfleet agent John Harrison (Benedict Cumberbatch). The meeting is attacked by a jumpship piloted by Harrison. Kirk destroys it, but Pike is killed. Harrison escapes by transporting to the Klingon homeworld of Kronos. Kirk is reinstated as the Enterprise's captain, and is ordered to find Harrison by Admiral Alexander Marcus (Peter Weller). Marcus supplies the Enterprise with prototype long-range photon torpedoes, ordering Kirk to fire them at Harrison when he is within range. Montgomery Scott (Simon Pegg) resigns in protest when he is forbidden from inspecting the weapons. Pavel Chekov (Anton Yelchin) is promoted to chief engineer and Dr. Carol Wallace (Alice Eve)—a science officer with expertise in the new weapons—joins the crew. Spock, Dr. Leonard McCoy (Karl Urban) and Uhura (Zoe Saldana) convince Kirk that it would be better to capture than kill Harrison, so he can be tried.

Arriving on Kronos, Kirk, Spock and Uhura try to capture Harrison but are intercepted by Klingons. Harrison kills the Klingons, surrendering after learning that they were prepared to fire 72 torpedoes. On the Enterprise, Harrison reveals his true identity: Khan, a genetically-engineered superhuman who was awakened by Marcus from a 300-year suspended animation to develop weapons and starships for a war between the Federation and the Klingons. Each torpedo contains a cryogenic pod with one of Khan's crew (previously held hostage by Marcus).

The Enterprise is intercepted by a larger, unmarked Federation warship: the USS Vengeance, designed by Khan and commanded by Marcus. Marcus demands that Kirk deliver Khan; Kirk refuses. The Enterprise heads to Earth for Khan's trial, but is attacked by the Vengeance in warp. With the Enterprise damaged, Kirk offers to exchange Khan and the cryogenic pods for his crew. Carol reveals herself as Carol Marcus, the admiral's daughter, who joined the Enterprise under her mother's maiden name. Marcus transports her to the Vengeance, revealing his intention to destroy the Enterprise in his plan to begin a war with the Klingons. When the Vengeance prepares to open fire, it experiences a power outage caused by Scott (who has infiltrated the ship). With the transporters down, Kirk and Khan travel to the Vengeance by space-jump between the ships' airlocks. After seizing the bridge Khan overpowers Scott and Kirk, crushes Carol's leg and kills Marcus, controlling the Vengeance.

Khan negotiates with Spock, beaming Kirk and his boarding party back to the Enterprise in exchange for the prototype torpedoes (to destroy the Enterprise). Spock hands over the torpedoes after removing Khan's frozen crew and having McCoy arm them. The torpedoes incapacitate the Vengeance; both damaged starships begin falling towards Earth. With a misalignment of the warp-core heads making the Enterprise powerless, Kirk enters the radioactive engine chamber and re-aligns the heads to prevent the ship's destruction; he dies of radiation poisoning.

Khan crashes the Vengeance into San Francisco to destroy Starfleet's headquarters (where Spock transports, to pursue him). McCoy discovers (when experimenting on a tribble) that Khan's blood has regenerative properties which may save Kirk. Spock and Uhura capture Khan, and Kirk is revived.

A year later Kirk addresses a gathering memorializing the events, reciting his "where no-one has gone before" speech. Khan is resealed in his cryogenic pod and stored with his crew, and Carol joins a rebuilt Enterprise as it departs on a five-year mission.