Start a Wiki
watch 01:38
The Loop (Movies)
Do you like this video?
Star Wars: The Clone Wars 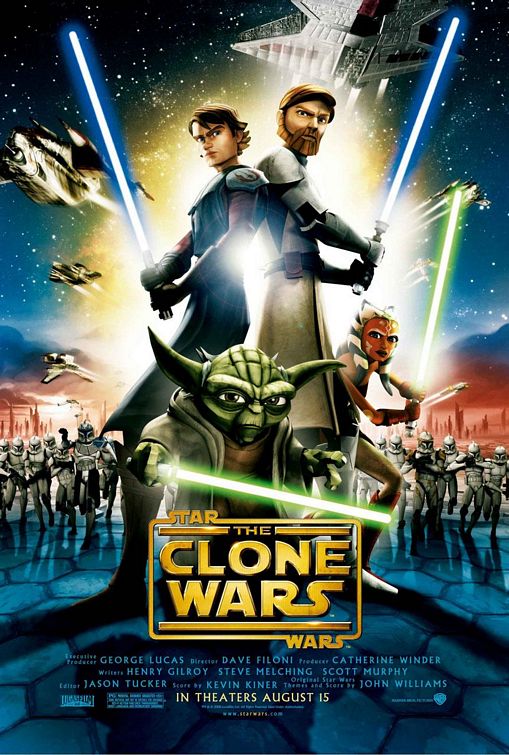 "It's unusual for an animated film, because it's not really like say Beowulf and it's not a Pixar movie, so it kind of falls in between in this funny world where Star Wars is, which is kind of hard-edged but not really, sort of on the verge of PG-13, flips over once in a while, but sort of the high end of PG." - George Lucas

Star Wars: The Clone Wars is a 2008 animated feature film directed by Dave Filoni and executive produced by George Lucas. It was the eighth Star Wars film to be released in theaters, and the first since Revenge of the Sith in 2005. The film is a first for the franchise in two respects, being the first theatrically-released animated film in the series and the first Star Wars film not distributed by 20th Century Fox.

The Clone Wars served as an introduction to the animated series of the same name that premiered on Cartoon Network on October 3, 2008; not to be confused with the similarly titled Star Wars: Clone Wars series from 2003. George Lucas was inspired to make the movie while reviewing footage from the show and described the film as "almost an afterthought."[3] The film was released August 15, 2008 to mostly negative reviews[4] and earned $14.6 million during its opening weekend.

A galaxy divided! Striking swiftly after

The film begins with a narrator explaining the state of the war. The Separatists control the majority of the hyperlanes, leaving Republic forces stranded in different parts of the Outer Rim. An octopus-like craft heads for Tatooine to capture Jabba the Hutt's son Rotta as part of a plan to make the Hutts join the Clone Wars. Meanwhile, a fierce battle is taking place on the crystalline planet of Christophsis between the Republic's very limited clone army and the Retail Clan forces.

With the help of Obi-Wan Kenobi, Anakin Skywalker, Rex and Cody, the clones steadily advance on the Separatists' forces, gaining the Republic an early victory. It doesn't last long, though, as the droid army under General Loathsom soon returns for more bloodshed, and with no communications and the ability to fly in reinforcements, the fate of the few remaining clone soldiers are in the hands of Obi-Wan and Anakin. A shuttle soon comes with an important delivery; thinking it's reinforcements, the Jedi go to investigate - only to find a young Padawan named Ahsoka Tano, who insists that she has been sent by Master Yoda to serve as Anakin's Padawan. The battle soon commences yet again, with the Separatist forces advancing behind an expanding shield that artillery can't penetrate. Tasked with taking down the deflector shield, Anakin and Ahsoka succeed in penetrating the enemy lines, using all their stealth, cunning and ability to improvise, while Obi-Wan stalls for time by holding a fake surrender negotiation with Loathsom.

Soon after the final victory for the Republic on Christophsis, Master Yoda arrives with the urgent message that a mysterious group of renegades has kidnapped Jabba's son, and it's up to Anakin, Ahsoka, Rex and the clones to rescue him and bring him back home safely. Obi-Wan flies to Tatooine to assure Jabba that Rotta will be returned safely and to secure a promise by the Hutts to use their trading routes for safe passage within the Outer Rim.

After briefing in a Republic flagship, Anakin's forces descend through the clouds of the jungle planet of Teth for one of the many natural stone pillars which litter the landscape. Under heavy fire, Anakin, Ahsoka and Rex storm the monastery atop the pillar and find Rotta, who has gotten sick, only to be caught in an elaborate trap: Count Dooku has staged the kidnapping himself in order to blacklist the Jedi among the Hutts. First he has the Jedi retrieve the young Hutt to secure fake evidence, then Asajj Ventress, as the overseer of the operation, is charged with either retrieving or killing the young Huttlet.

While quarreling all the while about the proper procedure, yet slowly gaining respect of one another, Anakin and Ahsoka manage to escape the trap along with R2-D2 and hijack a derelict transport, which they use to travel to Tatooine. Ahsoka uses medicine on board to treat the sick Huttlet. Obi-Wan, alerted by Anakin, arrives just in time to relieve Rex and the rest of his forces and engages Ventress in combat where he manages to defeat her, though Ventress flees in the face of capture.

In the meantime, Senator Amidala learns of Anakin's mission. Worried about him, she decides to contact Jabba's uncle, Ziro the Hutt, who lives in a shady part of Coruscant. The Hutt strangely refuses to cooperate, and soon Padmé finds out why: Ziro has actually conspired with Dooku to engineer the downfall of his nephew to seize the power over the Hutt clans for himself. Padmé is discovered and detained, but a chance call by C-3PO enables her to summon help, and Ziro is soon arrested.

Upon their arrival on Tatooine, Anakin and Ahsoka are attacked by MagnaGuards and shot down. Faced with a long way across desert sands and relentless opponents, Anakin devises a ruse; when Dooku corners Anakin, the pack he is carrying is revealed to contain merely rocks. Ahsoka and R2 travel with Rotta to Jabba's palace unmolested, but just as they near it, Ahsoka is ambushed by three MagnaGuards, whom she narrowly defeats. But as Anakin and Ahsoka enter the palace one after another, they are threatened with execution by Jabba's men even though Rotta is safely returned. Padmé calls just in time to convince Jabba of his uncle's duplicity, and Anakin and Ahsoka are triumphantly retrieved by Obi-Wan, Yoda, Cody and the clones.

Retrieved from "https://movies.fandom.com/wiki/Star_Wars:_The_Clone_Wars?oldid=127409"
Community content is available under CC-BY-SA unless otherwise noted.