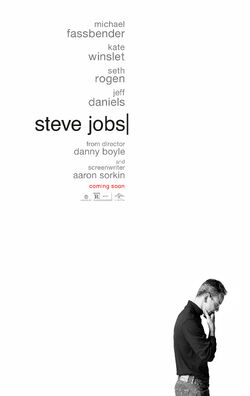 Steve Jobs is a 2015 biographical drama film based on the life of Apple Inc. co-founder Steve Jobs, starring Michael Fassbender in the title role. The film is directed by Danny Boyle, produced by Scott Rudin, and based on a screenplay written by Aaron Sorkin, which was adapted from Walter Isaacson's biography Steve Jobs. It was released on October 9, 2015.

In 1984, the Apple Macintosh 128K's voice demo fails less than an hour before its unveiling at Flint Center. Apple co-founder Steve Jobs demands engineer Andy Hertzfeld fix it, threatening to publicly implicate him in the presentation's credits if he does not. Hertzfeld finally suggests faking the demo using the prototype Macintosh 512K computer.

Jobs rants to marketing executive Joanna Hoffman about a Time magazine article exposing his paternity dispute with ex-girlfriend Chrisann Brennan – he denies he is the father of Brennan's five-year-old daughter, Lisa. Brennan arrives with Lisa to confront him – she is bitter over his denials and his refusal to support her despite his wealth. Jobs bonds with Lisa over her MacPaint art and agrees to provide more money and a house. Apple co-founder Steve Wozniak asks Jobs to acknowledge the Apple II team in his presentation, but Jobs feels that mentioning the computer (which he considers obsolete) is unwise.

By 1988, following the apparent failure of the Macintosh, Jobs has founded a new company, NeXT. Before the NeXT Computer launch at the War Memorial Opera House, he spends time with 9-year-old Lisa, but his relationship with Brennan is still strained – he accuses her of irresponsible behavior and of using Lisa to get money from him. Wozniak arrives and predicts the NeXT will be another failure. Jobs confronts him about his public criticism of him, and Wozniak questions Jobs' contributions to computing history. Jobs defends his role as that of a conductor, who directs "musicians" like Wozniak.

Apple CEO John Sculley demands to know why the world believes he fired Jobs – Jobs was actually forced out by the Apple board, who were resolute on updating the Apple II following the Macintosh's lackluster sales. Jobs lambasted the decision and dared them to cast a final vote on his tenure, despite Sculley's warnings. After Hoffman and Jobs discuss NeXT's unclear direction, she realizes that Jobs has designed the computer to entice Apple to buy the company and reinstate him.

By 1998, Apple has fired Sculley, purchased NeXT, and named Jobs CEO, and Jobs is about to unveil the iMac at Davies Symphony Hall. He is delighted by Hoffman's strong commercial forecasts, but furious that Lisa has allowed her mother to sell the house Jobs bought for them. Hoffman reminds Jobs that he threatened to withhold Lisa's college tuition – Hertzfeld admits that he paid Lisa's tuition and suggested she attend therapy. Wozniak again asks that Jobs credit the Apple II team during the presentation, and again he refuses.

Sculley arrives in secret and the two make amends. Jobs and Sculley discuss Jobs' life as an adopted child, and Jobs admits that his need for control stems from his feelings of powerlessness in being given up. At the behest of Hoffman, Jobs apologizes to Lisa for his mistakes and accepts that he is her father, admitting that he is "poorly made". Lisa watches her father take the stage to introduce the iMac.

Retrieved from "https://movies.fandom.com/wiki/Steve_Jobs?oldid=171506"
Community content is available under CC-BY-SA unless otherwise noted.