SWriter Skip Donahue (Wilder) and actor Harry Monroe (Pryor) are fired from their jobs in New York, and leave for Hollywood. Along the way, they take odd jobs to make ends meet. In one such job, Skip and Harry dress up as two woodpeckers, performing a song and dance routine as part of a promotion for a bank. Harry and Skip remove their costumes to take a break, and two men who have been watching steal the costumes and perform the routine as though they were Harry and Skip. The men then use the costumes to rob the bank, and in the confusion Harry and Skip are immediately arrested, whisked through a speedy trial and handed 125-year jail sentences. Their court-appointed lawyer, Len Garber (Joel Brooks), advises them to wait until he can appeal their case.

Life in a maximum-security prison proves difficult for both Skip and Harry. After a failed attempt at faking insanity, they make friends with Jesus Ramirez (Miguel Ángel Suárez), a real bank robber, and Rory Schultebrand (Georg Stanford Brown), a gay man who killed his stepfather. Rory takes an immediate fancy to Harry, much to Harry's chagrin. Having been there a while, Jesus and Rory inform Skip and Harry of the numerous goings-on in the prison, as well as the other members and who to watch out for, such as Jack Graham (Jonathan Banks), who runs the cell block, and is in charge of the contraband that comes in; and ax murderer Blade (Charles Weldon), who runs the "third-world" side of the cell block. The most feared inmate, however, is Grossberger (Erland Van Lidth), a convicted mass murderer of incredible size and strength who refuses to speak and is feared by the inmates and guards alike. Seeing something "kind" in Grossberger, the naive Skip attempts to talk with him, unsuccessfully.

After being in prison for three months, Skip and Harry are brought to see Warden Walter Beatty (Barry Corbin) and Deputy Warden Wilson (Craig T. Nelson), the head guard. They wish to run a "test" with Harry and Skip on a mechanical bull in the warden's office. To everyone's surprise, Skip rides the bull at full power, so Beatty selects him to compete in the prison's annual rodeo competition.

Out in the yard, Jesus and Rory inform Harry and Skip of the truth behind the rodeo: it's really a crooked operation run by Beatty and Warden Henry Sampson (Nicolas Coster), who heads the neighboring prison. The money from the rodeo, which is supposed to go to the prisoners, really ends up in the wardens' pockets. Knowing that Skip will be selected as the prison's new "champion", Jesus and Rory hatch a plan for escape. In order for it to work, Skip must refuse to participate in the rodeo: the longer he holds out, the better chance he has at "striking a deal" with the warden. After Skip refuses to participate, the angry warden orders Deputy Wilson to "straighten him out", which Wilson is only too happy to do.

Prison life soon becomes more difficult than ever for Harry and Skip as Wilson and the guards attempt to break them down. First they are put on hard labor detail and deprived of both water and sleep. When this fails, the guards lock Skip up, overnight, hanging by his wrists and ankles. Skip awakens the next morning to discover that his bad back is cured. Wilson then puts Skip in solitary confinement; Skip asks for an extra day. Being returned to his cell, Skip discovers that he and Harry have a new cell mate: Grossberger, whom they quickly befriend.

Harry and Skip are visited by Garber, along with his cousin Meredith (JoBeth Williams), who is fighting to prove their innocence. Skip takes an immediate liking to Meredith, who informs him she never gets personally involved with clients.

Meanwhile, Warden Beatty is furious at Wilson for not breaking Harry and Skip yet, and decides to handle things himself. Soon afterward, Harry is sent to the prison's hospital ward for appendicitis. A prisoner in the neighboring bed (Franklyn Ajaye) tells Harry of the horrors of the ward: he himself was admitted for a hernia operation, and the doctor castrated him in the process. As soon as Harry sees the doctor (Alvin Ing), he runs screaming from the ward.

Skip meets with Warden Beatty to make a deal. In exchange for Skip's participation in the rodeo, Skip requests his own crew (Harry, Jesus, Rory, and Grossberger), along with a much bigger jail cell, all according to the plan. Warden Beatty agrees, telling Deputy Wilson to have an inmate guard watch them at all times. Willson assigns Graham and Blade to the task, who anxiously voice their resentment: Graham, who resents being "pushed aside" for Skip, and Blade, who regard the group as "brown-noses". Wilson tells Graham of his own agenda: Skip will not leave the rodeo alive.

Training Skip and Harry for the rodeo, Graham ensures that their lives - especially Harry's - are made difficult. While practicing for the rodeo, Skip, Harry, Jesus, Rory and Grossberger acquire the numerous tools they require for their escape, using the prison's metal shop to transform them into seemingly everyday items. In their new large jail cell, the quintet have numerous comforts: books, a television, a radio, and a guitar, among other things. While relaxing in their cell, Grossberger breaks his silence when he sings "Birmingham Jail" during an awkward moment.

Meredith has gotten a job as a waitress in a country western strip club, so she may search for possible suspects. When she meets the real crooks - recognized by a tattoo on one of their hands that a witness (Tracy Lee Rowe) saw on one of them - Meredith calls Len Garber, and the police.

The rodeo begins, and Skip, Harry, Jesus, Rory and Grossberger all perform their tasks flawlessly, arousing no suspicions, in spite of Wilson and Graham's attempt to kill Skip: Graham spikes a horse Skip is riding, but Skip manages to stay on the horse and dismount, unhurt. Graham then puts a lock on the gate, trapping Skip inside with an out-of control bull, but Grossberger breaks the lock off, allowing Skip out through the chute with the bull. During every major event when everyone is distracted, one of them slips out through a secret opening, taking them through air vents to either a restroom, where Jesus' wife Teresa (Karmin Murcelo) waits to provide them disguises, or through a vent to a hollow pushcart, manned by Jesus' brother Ramon (Henry Kingi). Once through, they put on their disguises and re-enter the grounds as customers.

Skip is set to compete against reigning champion Caesar Geronimo (Joe Massengale) to swipe the prize: a bag of money (in reality the wardens' side bet) from the horns of a large, Brahman bull. Skip asks Caesar if he's tired of being his warden's stooge, suggesting that they give the money to the prisoners, even offering to help Caesar win if he chooses to do so. Both contestants play hard, but Caesar is the winner, grabbing the bag. Inspired by Skip's words, Caesar throws the bag over the fence to the inmates, much to the shock and outrage of wardens Beatty and Sampson. Skip prepares his own escape through the secret opening, but Graham shows up, suspicious. Grossberger knocks Graham out and Skip makes his escape into the waiting pushcart. He's herded off into the waiting camper, and the group drives off.

Arriving at a secret meeting spot, Jesus and Rory quickly make introductions, then bid Harry and Skip farewell as they all pile into a waiting car, heading off to Mexico. Harry and Skip hop in the other waiting car, only to be stopped by another car containing Len Garber and Meredith. She tells Harry and Skip that, thanks to her work, the police have captured the real crooks, who have confessed to the bank robbery that wrongly convicted them. Harry and Skip, ecstatic, decide to resume their original plans of heading to Hollywood. Skip asks Meredith to go with him, and Meredith, on a whim, says yes. 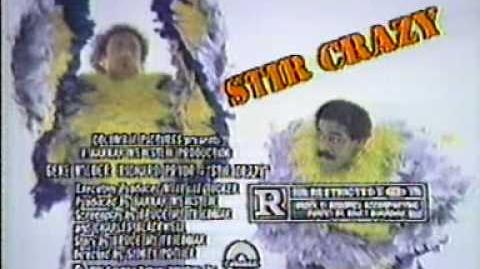