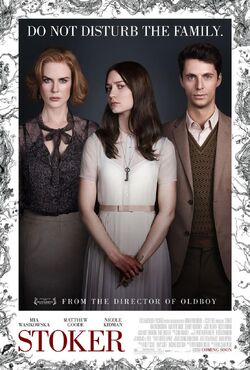 Stoker is a 2013 British-American psychological thriller drama film directed by Park Chan-wook and written by Wentworth Miller. It was released on March 1, 2013.

After India's father dies in an auto accident, her Uncle Charlie, who she never knew existed, comes to live with her and her emotionally unstable mother. Soon after his arrival, she comes to suspect this mysterious, charming man has ulterior motives, but instead of feeling outrage or horror, this friendless girl becomes increasingly infatuated with him.

Wentworth Miller wrote the screenplay for Stoker, as well as a prequel, Uncle Charlie. He used the pseudonym Ted Foulke, later explaining "I just wanted the scripts to sink or swim on their own."Miller's script was voted to the 2010 "Black List" of the 10 best unproduced screenplays making the rounds in Hollywood.

Miller described it as a "horror film, a family drama and a psychological thriller." Although influenced by Bram Stoker's Dracula, Miller clarified that Stoker was "not about vampires. It was never meant to be about vampires but it is a horror story. A stoker is one who stokes, which also ties in nicely with the narrative."Hitchcock's Shadow of a Doubt also influenced the film. Miller said: "The jumping off point is actually Hitchcock's Shadow of a Doubt. So, that's where we begin, and then we take it in a very, very different direction."

The film marks director Park Chan-wook's English-language debut. Filming began in Nashville, Tennessee in September 2011. Portions were also filmed in nearby Murfreesboro on September 22. Principal photography wrapped on October 23. Composer Philip Glass was originally hired to compose the film's score but was replaced by Clint Mansell.


Retrieved from "https://movies.fandom.com/wiki/Stoker?oldid=178913"
Community content is available under CC-BY-SA unless otherwise noted.