watch 01:20
The Loop (Movies)
Do you like this video?
Strange Magic 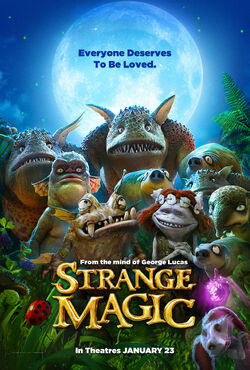 Based on Shakespeare's A Midsummer Night's Dream, Strange Magic is a fairy tale of goblins, fairies and imps meeting for the first time and the consequent confusions and conflicts the culture clash causes.[1]

Retrieved from "https://movies.fandom.com/wiki/Strange_Magic?oldid=127407"
Community content is available under CC-BY-SA unless otherwise noted.