Start a Wiki
watch 01:27
The Loop (Movies)
Do you like this video?
Struck by Lightning 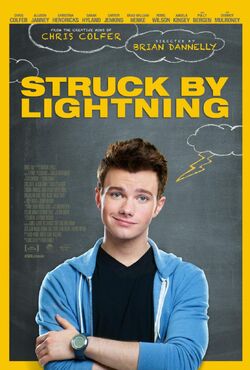 Struck by Lightning is a 2012 coming-of-age comedy starring Chris Colfer, who also wrote the screenplay, produced the film, and authored a similarly titled book based on the film (Struck By Lightning: The Carson Phillips Journal). The film is directed by Brian Dannelly. The movie had its world premiere at Tribeca Film Festival on April 21, 2012. The movie will be released to theaters January 11, 2013.

High school senior Carson Phillips was destined for bigger things than his close-minded small town could ever offer. He was on a path to greatness, but destiny had a different plan when he was suddenly killed by a bolt of lightning in his school parking lot. Demonstrating that life is what happens while you're busy planning your future, Carson recounts the last few weeks of his life via witty, insightful flashbacks, including a blackmail scheme targeting the popular kids in school that he concocts with his best friend, and a home life that includes a mother who's more interested in the bottle than her son's future and an estranged father who suddenly appears with a pregnant fiancee. 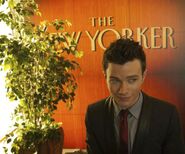 Retrieved from "https://movies.fandom.com/wiki/Struck_by_Lightning_(2012)?oldid=203605"
Community content is available under CC-BY-SA unless otherwise noted.