View src
watch 01:33
House of the Dragon Trailer - The Loop
Do you like this video?
Play Sound
Stuber 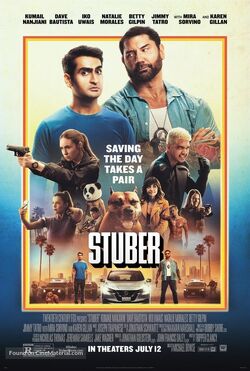 A meager Uber driver named Stu is forced by an aggressive LAPD detective named Vic to drive him around town to catch a notorious drug lord named Oka Teijo. For Vic, it is especially personal, as Teijo murdered Vic's partner.

Along the way, Stu deals with Vic's mad behavior while trying to express his feelings to his friend Becca. Stu and Vic confront each other about Stu's inability to man up while Vic is called out for his toxic masculinity and negligence toward his daughter Nicole.

Eventually, the two face Teijo at the location of his drop, where Vic finds that Captain Angie McHenry is a dirty cop who has been working with Teijo and was planning to frame Vic for murder to get him off their trail, while Stu does admit he loves Becca, but then realizes it wouldn't work since he knows she doesn't feel the same way and that they shouldn't even be friends.

Stu and Vic work together to take the villains down, but Nicole ends up in the mayhem when she finds them and is nearly shot by Teijo. Stu takes the bullet, and Vic almost kills Teijo before Nicole stops him, and the cops arrive to bring Teijo to justice.

After Stu and Vic recover, they become good friends, and Stu starts to date Nicole, although Vic isn't sure how to feel about that.