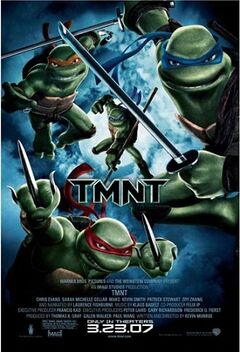 TMNT is a 2007 American computer-animated fantasy film based on the Teenage Mutant Ninja Turtles characters published by Mirage Studios. The film is the fourth and final installment in the original film series. It was the first Teenage Mutant Ninja Turtles film made with computer-generated imagery (CGI), created by Nickelodeon Movies, as well as the first feature film in the franchise in 14 years.

Written and directed by Kevin Munroe, the film features the voice talents of Nolan North, James Arnold Taylor, Mikey Kelley, Mitchell Whitfield, Chris Evans, Sarah Michelle Gellar, Kevin Smith, Patrick Stewart, Zhang Ziyi and Laurence Fishburne (who provides narration). It was the last film that Mako Iwamatsu made before his death and was co-produced by the franchise's co-creator Peter Laird for Paramount Pictures.

Chronologically, the plot of TMNT takes place after the original Teenage Mutant Ninja Turtles live-action film trilogy. However TMNT co-creator Peter Laird claims it takes place in its own universe. The film sees the four Turtles (Raphael, Leonardo, Donatello, and Michelangelo) grow apart after their final defeat of the Shredder, when strange things are happening in New York City as ancient creatures threaten the world and the Turtles must reunite to save it.

TMNT premiered theatrically in the USA on March 23, 2007.[1] It was a commercial success, grossing $95 million worldwide, but received largely negative reviews from film critics. Its release coincided with tie-in products including toys, comics and video games.

3,000 years ago, a warlord named Yaotl and his four generals discover a portal opening into a parallel universe which is said to have great power. Yaotl becomes immortal from the power, but his four generals were turned to stone. The portal releases 13 immortal monsters that destroy his army as well as his enemies. In the present, the Teenage Mutant Ninja Turtles have grown apart. After defeating the Shredder, Master Splinter has sent Leonardo to Central America for training. Donatello works as an IT specialist, Michelangelo works as a birthday party entertainer called "Cowabunga Carl" and Raphael works at night as the vigilante "Nightwatcher". April O'Neil operates a company that locates and acquires relics for collectors with the help of her boyfriend, Casey Jones.

During a business trip to Central America, April tells Leonardo that the turtles have drifted apart. April returns to New York with a statue for her client, Max Winters, the CEO of a financial empire. Leo also returns, and April and Casey deliver the statue to Winters. Winters hires Karai and the Foot Clan to search the city for the thirteen beasts before the portal opens again. Raphael encounters Casey, who reveals his knowledge of Raphael's double identity and joins him in hunting criminals. Winters, who is actually Yaotl who is still immortal, reanimates his generals with advanced technology, but they remain made of stone. Leo returns to the sewer, meeting Splinter. Splinter forbids the Turtles from fighting until they can act as a team again. While training, the Turtles encounter one of the thirteen beasts battling the Foot Clan. The Turtles engage the beast, going against Leo and Splinter's orders. When Raphael visits Casey, they encounter one of the monsters and witness its capture by the Foot and the Stone Generals, who spot them and Raphael is knocked unconscious. Casey takes Raphael back to the apartment while April calls the Turtles for help and reveals the identities of Yaotl and his Generals. After being revived, Raphael suggests they pursue Yaotl, but Leo forbids him to go until Splinter gives out the order and so Raphael goes out to investigate alone.

Leo, Donny and Mikey return to their sewer home to plan their next move, where Donny discovers the reopening of the portal will be directly over Winters' tower. Splinter tells Leo that his team is incomplete, and that he knows what he must do. After eleven monsters have been captured, General Aguila questions Yaotl's actions. The Generals conspire to betray Yaotl, wanting to remain immortal. Raphael encounters one of the remaining monsters but drives it off. Leo fights Raph, but when he breaks Leo's twin swords, Raphael is forced to leave. The Generals capture Leo, intending to substitute him for the thirteenth missing beast, and Raphael decides to make amends by rescuing Leo. As the portal opens, Yaotl discovers his generals' treachery, while Splinter and the Turtles, accompanied by Casey and April, fight their way through the Foot Clan cordon and breach the tower. Yaotl reveals the truth to the heroes: he wants to be free of his curse of immortality. The Generals reveal that they wish to preserve their immortality, but also to use the portal to bring in more monsters to conquer the world.

Having refused to betray Yaotl in exchange for serving the Generals, April, Casey and the Foot Clan work together, searching for the final monster while the Turtles fight the Generals. Splinter and Yaotl fight off numerous monsters emerging from the portal. April, Casey and Karai arrive at the tower with the last monster. The monster crashes into the Generals, dragging them into the portal before it closes. Karai warns them to enjoy their victory while it lasts, claiming they will soon contend with a familiar foe, which the Turtles suspect to be the Shredder. She and the rest of the Foot Clan depart. Yaotl, now mortal, honors the Turtles and Splinter, thanking them for fulfilling his wish before disappearing. Splinter places Yaotl's helmet among his trophy collection, as well as Raphael's "Nightwatcher" helmet and Michelangelo's turtle costume, and the film ends with Raphael narrating that the Turtles will always be brothers as the four of them jump across the rooftops of New York.

Retrieved from "https://movies.fandom.com/wiki/TMNT_(film)?oldid=289643"
Community content is available under CC-BY-SA unless otherwise noted.