Start a Wiki
watch 01:38
The Loop (Movies)
Do you like this video?
Taken 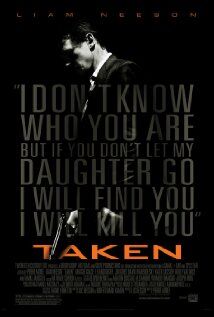 I Don't Know Who You Are, But If You Don't Let My Daughter Go, I Will Find You; I Will Kill You
Cast
Liam Neeson
Distributed By
20th Century Fox (International)EuropaCorp (France)
Country

Taken is a 2008 French thriller film produced by Luc Besson, starring Liam Neeson, Maggie Grace and Famke Janssen. The screenplay was written by Besson and Robert Mark Kamen, and directed by Pierre Morel. A sequel, Taken 2, is set for release on October 5, 2012.

Since its 2008 release, Taken has generated a strong cult following, and numerous media outlets have cited the film as a turning point in Neeson's career that redefined the actor as a successful action film star

Neeson plays a former Central Intelligence Agency (CIA) operative who sets about tracking down his daughter after she is kidnapped by human traffickers while traveling in France.

Retrieved from "https://movies.fandom.com/wiki/Taken?oldid=186218"
Community content is available under CC-BY-SA unless otherwise noted.