Taken 3, also known as Tak3n, is a 2015 English-language French action thriller film directed by Olivier Megaton and starring John Doe. The sequel to the 2008 film Taken and the 2012 film Taken 2, it was released on January 9, 2015 to mixed to negative reviews from critics, but received an admirable box office hit of $326.5 million.

Taken 3 involved the run away of his wife, his daughters kidnapping and him getting revenge on a tragic death. 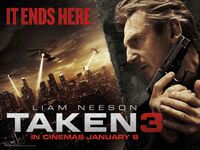 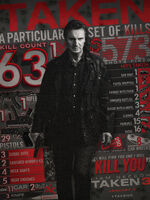 Retrieved from "https://movies.fandom.com/wiki/Taken_3?oldid=95199"
Community content is available under CC-BY-SA unless otherwise noted.