Start a Wiki
Teen Titans Go! to the Movies 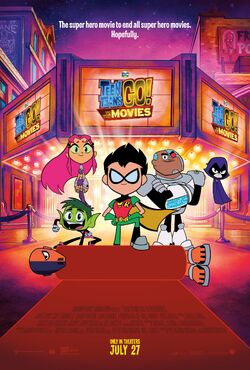 Teen Titans Go! to the Movies is a 2018 American animated superhero action comedy film based on the television series Teen Titans Go! and produced by Warner Bros. Animation. It is written by series developers Michael Jelenic and Aaron Horvath, and directed by series producer Peter Rida Michail and Horvath. The event of the movie takes place during the fifth season of Teen Titans Go!

It is the second theatrical film based on an animated Warner Bros. television series, 25 years after Batman: Mask of the Phantasm. The film features the voices of Greg Cipes, Scott Menville, Khary Payton, Tara Strong, Hynden Walch, Will Arnett, and Kristen Bell. It was released on July 27, 2018, by Warner Bros. Pictures.

The Teen Titans find out that every single hero in the DC Universe has their own films, ranging from Batman and Superman, to characters like Aquaman and Alfred Pennyworth. So they search for a director for their movie. But famous Hollywood director Jade Wilson rejects their offer because of their recent actions over the past few years and they're no longer taken seriously. However, they find a window of opportunity for their own movie by having their own nemesis in the form of Slade, who plans to mind control the entire Justice League and take over the world.

On September 25, 2017, Warner Bros. Pictures announced the film and its release date of July 27, 2018, with the show's cast reprising their roles. A month later, the film's title and teaser poster debuted, and it was announced that Will Arnett and Kristen Bell had joined the cast.

On March 12, 2018, it was announced that musicians Lil Yachty and Halsey were part of the cast as Green Lantern and Wonder Woman respectively, with Nicolas Cage announced as Superman the following day. Cage himself was originally going to portray Superman in Tim Burton's canceled Superman film, Superman Lives. Jimmy Kimmel was later announced to voice Batman in the film, through an extended cut of the trailer on the same day.

The film was released in theaters on July 27, 2018, by Warner Bros. Pictures, followed by release in the United Kingdom a week later. An early screening was held in Vidcon 2018 for both badge members and YouTubers on June 22. The film held its world premiere on June 30, 2018. The film will also be shown at the San Diego Comic-Con International on July 20, 2018.

On January 10, 2018, the film's first teaser trailer was attached to Paddington 2, Peter Rabbit, Early Man and Sherlock Gnomes. On May 18, 2018, a new trailer was released with Show Dogs and Incredibles 2.

In the United States and Canada, Teen Titans Go! to the Movies will be released alongside Mission: Impossible - Fallout and is projected to gross $14–19 million in its opening weekend.

Retrieved from "https://movies.fandom.com/wiki/Teen_Titans_Go!_to_the_Movies?oldid=177633"
Community content is available under CC-BY-SA unless otherwise noted.