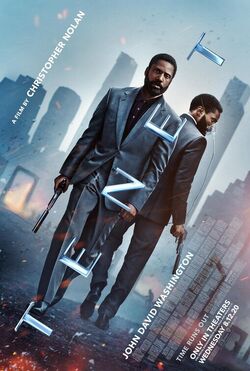 The film was initially scheduled to be released in the United States on July 17, 2020 by Warner Bros. Pictures, but due to the impact of the COVID-19 virus, was moved to new release dates multiple times.[1][2] On July 20, Warner Bros. removed it from theatrical release and was switching to "an unconventional theatrical rollout".[3]

Tenet went under the working title Merry Go Round during pre-production.

John David Washington, Robert Pattinson, and Elizabeth Debicki were cast in March 2019. Pattinson said the script was kept so secret that he was only permitted to read it once while locked in a room. The casting of Dimple Kapadia, Aaron Taylor-Johnson, Clémence Poésy, Michael Caine, and Kenneth Branagh was announced as filming started. Himesh Patel joined in August, with Denzil Smith being added the following month. Martin Donovan was revealed upon the release of the first trailer. In January 2020, Sean Avery announced his involvement in production.

Kapadia's screen test was shot by director Homi Adajania while working on his 2020 film Angrezi Medium. Caine worked with Washington for a day.

Principal photography began in May 2019 and took place in seven countries — Denmark, Estonia, India, Italy, Norway, the United Kingdom, and United States. Filming in Estonia happened in June and July, with the Linnahall, Pärnu Highway, and adjacent streets closed to facilitate it. Tallinn mayor Mihhail Kõlvart expressed concerns about potential disruptions as the original shooting schedule required that the arterial Laagna Road be closed for one month. Production eventually reached a compromise involving temporary road closures and detours. The city government later granted a two-day extension to allow filming to be completed. Scenes were shot in Ravello, Italy and Hampstead, England at Cannon Hall late August, and on the roof of the Oslo Opera House and in Tjuvholmen, Norway, and in Rødbyhavn, Denmark at Nysted Wind Farm early that September.

A five-day shoot occurred later that month in Mumbai, where Nolan had traveled in February and April for location scouting. He decided on Breach Candy Hospital, Cafe Mondegar, Colaba Causeway, Colaba Market, Gateway of India, Grant Road, Royal Bombay Yacht Club, and the Taj Mahal Palace Hotel. A restaurant set named "Chaand" was built near the hotel, but never used, serving only as an alternative. Forty boats were positioned at the Gateway of India, where the crew also rescued a man who had attempted suicide. A stunt where someone jumps off a building was done in Grant Road, and a helicopter was applied for aerial footage of the hospital.

Warner Bros. Pictures has scheduled Tenet for a August 12, 2020 release in IMAX, 35 mm, and 70 mm film. The release date was July 17, 2020 until the studio delayed the film due to the unexpected coronavirus pandemic. In August 2019, Warner Bros. debuted a forty-second teaser ahead of Hobbs & Shaw previews. It was attached to Indian showings of Joker in October.

The first trailer was published online in December, when the prologue played in select IMAX theaters before Star Wars: The Rise of Skywalker. It was introduced in Indian IMAX screenings of Birds of Prey in February 2020. On May 21, 2020, the second trailer was posted online, it was also promoted in Fortnite's Party Royale mode. The film's inverted logo had been altered around this time because it came to light that a bicycle brand had the same design.

Tenet received positive reviews. On Rotten Tomatoes, The film has a score of 71% based on 267 reviews with an average score of 6.95/10.

Retrieved from "https://movies.fandom.com/wiki/Tenet?oldid=274883"
Community content is available under CC-BY-SA unless otherwise noted.