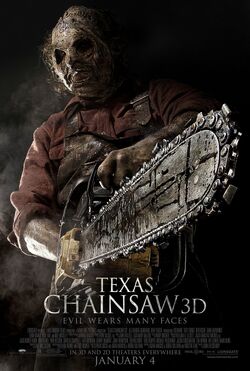 Texas Chainsaw 3D is an upcoming 3D horror film and the seventh film in The Texas Chainsaw Massacre franchise. It is a direct sequel to the 1974 original film, immediately picking up where it left off. Filming began in late July 2011 and the movie is to be released January 4, 2013.

In November 2010, it was reported that the plot will follow the events after the 1974 film. Sources later reported in June 2011 that it will also involve a girl named Heather and her friends traveling to Texas to collect an inheritance, that includes Leatherface.

The cast list was released in a Lionsgate press release on July 19, 2011.

In January 2007, when asked if a third film continuing the plot of the 2006 remake, The Texas Chainsaw Massacre: The Beginning was in production, producer Bradley Fuller stated that there were no future plans for Platinum Dunes to continue the franchise. In October 2009, Twisted Pictures landed a deal with the The Texas Chainsaw Massacre rights-holders Bob Kuhn and Kim Henkel after discussions with Platinum Dunes fell apart. The deal is for multiple films.

Carl Mazzocone signed on to produce The Texas Chainsaw Massacre 3D, with Avi Lerner and Mark Burg serving as executive producers It was written by Debra Sullivan and Adam Marcus, with later drafts by Kirsten Elms and John Luessenhop. Luessenhop will also direct.

The film moved into pre-production in June 2011. Principal photography began in late July 2011 at Millennium Studios in Shreveport, Louisiana. Filming of a pool party sequence took place on August 1. In late August, production moved to Mansfield at the Courthouse Square and the city's Sheriff's office.

The Texas Chainsaw Massacre 3D is scheduled for an October 5, 2012 release. Lionsgate has the United States distribution rights and Nu Image will handle international sales beginning at the Cannes Film Festival.

Retrieved from "https://movies.fandom.com/wiki/Texas_Chainsaw_3D?oldid=119385"
Community content is available under CC-BY-SA unless otherwise noted.