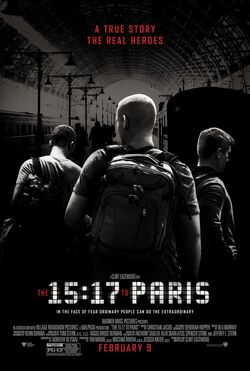 The 15:17 to Paris is an American biographical thriller film directed by Clint Eastwood.

While working part time at a smoothie shop, Spencer waits on a recruiter for the United States Marine Corps. He asks the recruiter what military branch he would select if he could go back. The recruiter replies that the Air Force pararescue save lives and "seem to being doing fine work in the field." Spencer is intrigued and decides that he wants to join up. So he begins working out to lose some extra weight. After several months of rigorous training and exercise, he gets into much better shape and enlists in the Air Force in hopes of becoming a Pararescueman.

Upon completing basic training, Spencer takes his exams to qualify for pararescue school. But having poor depth perception, he is turned down. Upset, he chooses from the other Air Force options left to him, and is soon stationed abroad. His friend, Alek, enlisted in the Army, and has been deployed to Afghanistan. On Skype, Alek tells him that he is planning to visit his girlfriend in Germany, and the two decide to rendezvous there for their next leave. Spencer skypes Anthony, now a college student, and talks him into coming to Europe for a vacation, visiting Italy. Afterwards, the three meet in Germany and decide to go to Amsterdam. After a few days there, they finally decide to visit France after deliberation. They depart from Amsterdam Centraal station on the 15:17 train to Paris.

On the train, all seems well, until American-born Frenchman Mark Moogalian notices that one of the toilets has been occupied for an unusually long time. When he goes to investigate, a terrorist bursts out with an assault rifle. Another passenger, Damien A., grabs the terrorist by the neck and Moogalian manages to wrest the rifle from the terrorist but is then shot in the back with a 9mm pistol. Passengers begin to flee out of their seats and rush toward the forward cabins of the train, trying to escape. Eventually, the terrorist approaches the next car, where Spencer and his friends are sitting. The moment Spencer sees him, he springs into action. He decides that his only hope, and the only hope of the remaining passengers, is for him to try to defeat the terrorist. Spencer makes a desperate all-out sprint toward the terrorist in the hope of subduing him before being shot. By remarkable luck, the terrorist's weapon jams just as he is about to fire, and he is tackled by Spencer, who successfully disarms the terrorist. Seeing Spencer's progress in subduing the terrorist, Alek, Anthony, and other passengers join the effort to try to further overwhelm the terrorist, finally knocking him out. Spencer then stanches the bleeding by plugging the exit wound in Moogalian's neck with his fingers. The police at the next station enter the train fully armed, discovering that Spencer has subdued the terrorist, and they begin to treat his wounds, and the more serious ones of the shot passenger. Paramedics take Moogalian to the emergency room at a local hospital and he survives.

In a formal ceremony, Spencer, Alek and Anthony are recognized as heroes of France for their gallantry and bravery. The terrorist was later discovered to have been armed with over 300 rounds of ammunition with the apparent aim of using all of it to wreak havoc on all those who boarded the train. The odds of the particular misfire and jam of the cartridge in the terrorist's weapon was estimated on the scene as being over a thousand-to-one, and highly unlikely to have been in Spencer's favor. French officials at the ceremony to honor Spencer's selfless act acknowledge his bravery and he is awarded the French Legion of Honour in recognition of his act of courage. On September 22, 2015, Mark Moogalian was awarded the Legion of Honor by President François Hollande for his actions on the train.

Retrieved from "https://movies.fandom.com/wiki/The_15:17_to_Paris?oldid=183133"
Community content is available under CC-BY-SA unless otherwise noted.