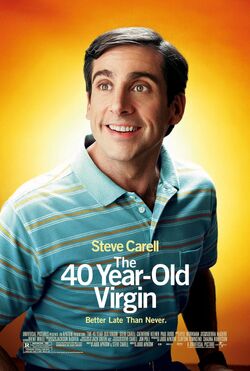 The 40-Year-Old Virgin is a 2005 American sex comedy film directed by Judd Apatow, who co-wrote the screenplay with Steve Carell. The film stars Carell as the titular 40-year-old virgin Andy Stitzer, an electronics salesman and a toy hobbyist whose friends resolve to help him lose his virginity. It was the directorial debut of Apatow. The screenplay features a great deal of improvised dialogue. The film was released theatrically in North America on August 19, 2005.

Andy Stitzer is a 40-year-old virgin who lives alone, his apartment filled with his collection of action figures and video games. At a poker game with his co-workers David, Cal, Mooj and Jay, when conversation turns to past sexual exploits, they learn that Andy is still a virgin, and resolve to help him lose his virginity.

Andy begins to socialize and form friendships with his co-workers. David, after running into his ex-girlfriend Amy, has an emotional breakdown at work. Store manager Paula promotes Andy to fill in for him.

Jay attempts to quicken the process by tricking Andy into meeting a prostitute. When Andy discovers the hooker is a male transvestite, he insists that his friends stop trying to help him. Andy lands a date with Trish Piedmont, a woman he met on the sales floor.

During Andy and Trish's first date, as they are about to have sex, they are interrupted by Trish's teenage daughter Marla. Trish suggests that they postpone having sex, and Andy enthusiastically agrees.

Andy's friends begin to encounter the consequences of their lifestyles. David, obsessed with Amy, takes a vow of celibacy. Jay, who previously boasted of his promiscuity, gets into an argument with a customer after his girlfriend breaks up with him over his infidelity. Jay concedes to Andy that sex can ruin a relationship.

Andy and Trish's relationship grows. Trish encourages Andy's dream of starting a business, suggesting they fund it by selling his collectibles. Andy takes Marla to a group session at a sexual health clinic, where she reveals she is a virgin. Andy, trying to defend her against derision, admits that he is also a virgin but is disbelieved and ridiculed. Marla later says that she knows Andy is a virgin, but agrees to let him tell Trish himself.

On the couple's twentieth date, the limit they agreed for their abstinence, Andy is still resistant, which upsets Trish. Trish demands he explain his reticence, and Andy accuses her of trying to change him against his will. He leaves for a nightclub where he meets his friends, gets drunk and praises them for encouraging him to have sex. Andy runs into Beth and they soon leave for her apartment. Marla convinces Trish to make up with Andy. By this time, Andy has sobered up and is having second thoughts. His friends arrive and encourage him to go back to Trish.

Andy returns to his apartment, where he finds Trish waiting for him. He attempts to apologize, but Trish, having found various suspicious items in his apartment, is now afraid that Andy may be some sort of sexual deviant. Andy tries to defend himself and declares his love for her, but she leaves in alarm and disgust. Andy chases after her on his bike, but collides with her car and flies through the side of a truck. Trish rushes to his side, and Andy confides that he is a virgin as explanation for his behavior. Trish is surprised but relieved, and they kiss.

Later, Andy and Trish are married in a lavish ceremony with everyone in attendance, with a sidelong mention that Andy's action figures sold for over half a million dollars. Afterwards, they consummate the marriage, the aftermath of which transitions into a musical scene where the characters sing and dance to "Aquarius/Let the Sunshine In".

Production on the film was nearly halted by Universal Pictures after five days of filming, allegedly due to concerns that the physical appearance of Carell's character resembled that of a serial killer. Production was started on January 17, 2005, and wrapped on April 1, 2005.

The production used over a million feet of film, a milestone reached on the last day of filming and recognized with free champagne by Technicolor. Using the conversion of 90 feet of film per minute, this means that the shooting ratio for the film is 96:1 (96 feet shot for each foot used in the release after editing) for the theatrical (84:1 for the unrated version).

On Rotten Tomatoes, a review aggregator, the film has an approval rating of 85% based on 184 reviews (156 fresh and 28 rotten) and an average rating of 7.2/10. The site's critical consensus reads, "Steve Carell's first star turn scores big with a tender treatment of its titular underdog, using raunchy but realistically funny comedy to connect with adult audiences." On Metacritic, the film has a score of 73 out of 100 based on 35 critics, indicating "generally favorable reviews".

Audiences polled by CinemaScore gave the film an average grade of "A-" on an A+ to F scale. Rotten Tomatoes declared it the "Best Reviewed Comedy of 2005."

Ebert and Roeper gave the film a "two thumbs up" rating. Roger Ebert said, "I was surprised by how funny, how sweet, and how wise the movie really is" and "the more you think about it, the better The 40-Year-Old Virgin gets." The pair gave minor criticisms, with Ebert describing "the way she (Catherine Keener as 'Trish') empathizes with Andy" as "almost too sweet to be funny" and Richard Roeper saying that the film was too long, and at times extremely frustrating. Roeper later chose the film as the tenth best of 2005.

Owen Gleiberman of Entertainment Weekly gave the movie an A-, saying that Carell "plays him [Andy] in the funniest and most surprising way possible: as a credible human being." Manohla Dargis of The New York Times called the film a "charmingly bent comedy," noting that Carell conveys a "sheer likability" and a "range as an actor" that was "crucial to making this film work as well as it does."

The film was criticized by Harry Forbes of Catholic News Service for promoting "the false premise that there's something intrinsically wrong with an unmarried man being sexually inexperienced," and by political columnist Cal Thomas for being an example of societal decline in regards to "self control or what was once known as purity."

In December 2005, the film was chosen by the American Film Institute as one of the ten best movies of the year, the only comedy film to be so recognized (though the comedy-drama The Squid and the Whale was also chosen). The film was also ranked No. 30 on Bravo's 100 Funniest Movies.

On home video the film was released with an additional 17 minutes under the banner "unrated". For the 100th Anniversary of Universal the theatrical edition was released on Blu-ray. This version also had a similar banner of "unrated".

The American Humane Association withheld its "no animals were harmed..." disclaimer due to the accidental deaths of several tropical fish used in the film.

Retrieved from "https://movies.fandom.com/wiki/The_40-Year-Old_Virgin?oldid=215995"
Community content is available under CC-BY-SA unless otherwise noted.